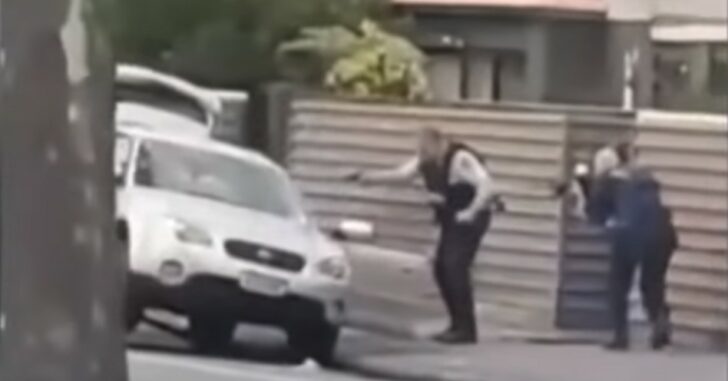 Screenshot from a video showing the suspect being detained by police.

In a turn of events, it seems that an armed citizen –in the typical sense– wasn’t what stopped the gunman from his rampage. Instead, a person inside the mosque found an opportunity and tackled the gunman, eventually gaining control of the firearm.

A survivor of Friday’s deadly mass shootings in New Zealand has spoken out about the moment his friend tackled the gunman and wrestled his weapon away from him as he opened fire on worshippers.

Syed Mazharuddin was praying at the Linwood mosque in Christchurch on Friday around lunchtime when a man wearing protective gear entered and began shooting at men, women and children inside. In the chaotic moments that followed, Mazharuddin said his friend found the chance to tackle the gunman and disarm him.

“The young guy who usually takes care of the mosque … he saw an opportunity and pounced on [the gunman] and took his gun,” Mazharuddin told the New Zealand Herald. “The hero tried to chase and he couldn’t find the trigger in the gun … he ran behind him but there were people waiting for him in the car and he fled.”

Either way, it would seem that a good guy with a gun, regardless of how he obtained that gun, was the hero for the day who saved many lives.

While the mainstream media isn’t rushing to push out this information, it would seem that an armed person inside the 2nd mosque that came under attack, was responsible for sending the gunman in the other direction after coming under fire himself.

According to the New Zealand Herald, the “well known Muslim local” chased the shooters with a rifle or shotgun, and fired two shots at them as they sped off in a car.

He was heard telling police officers he was firing in “self defense”.

“They were in a silver Subaru,” he told police.

The story is starting to spread throughout the 2A community.

If the story holds up, there is no doubt that this armed citizen saved many lives yesterday. The suspect had a literal free-for-all during his rampage, until he was met with resistance in the form of a good guy with a gun.

In total, 49 people were killed during the attacks and many injuries have been reported. The suspect was apprehended by police and is expected to face a judge Saturday morning.