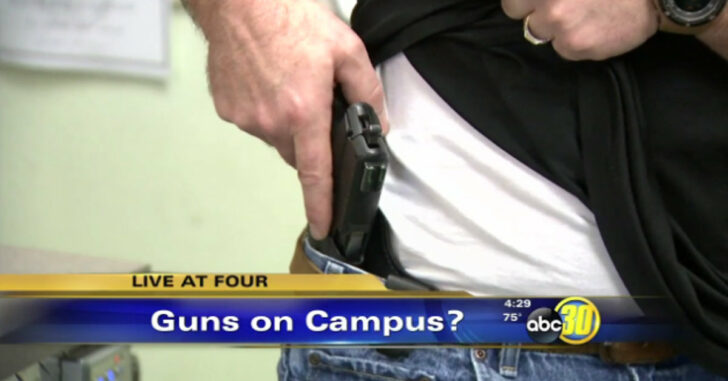 KINGSBURG, CALIFORNIA — Pulling a sheet from the Ohio district school system’s play book, one California school district is allowing up to five armed faculty members to be on campus. The school superintendent was one of the main proponents of a new measure which would allow a select group of staff members to carry concealed handguns to protect children and other faculty members.

As ABC 30 Action News reports, Superintendent Randy Morris believes that a rise in the targeting of schools by armed criminals is at the center of this proposal.

“The intent is to put the message out there,” Morris explained. “‘Hey, we are in a position where we would really like to be committed to protecting our staff and our kids, and we take that obligation very seriously.'”

The superintendent is currently in the process of getting his own concealed carry permit — which can be an arduous and difficult journey for some Californian residents. He believes, in addition to appointing five concealed carriers for the district, those people would also receive extensive training from local law enforcement so they can coordinate and work together in the event of an emergency.

“God forbid this happens and one of our staff members does draw a weapon. If police show up, they need to know how to respond and what to do,” said Morris.

If you ask me, that sounds like somebody being proactive in deterring criminals and bad guys from targeting schools in that district. While it’s sure to meet some resistance, the proposal has been read once at its first meeting and will be read and voted on a second time in a short while.

Here’s hoping that proactive measures to defeat potential armed threats takes root both in California and across the country.