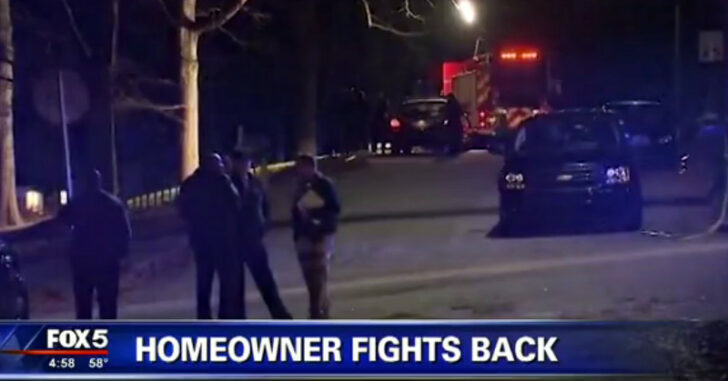 DEKALB COUNTY, GEORGIA — One armed home invader is dead and the other is listed in critical condition following a botched home invasion where both suspects were attempting to impersonate police or security officers.  According to FOX 5, the homeowner fought back after both intruders barged in.  Faced with the stark prospects of being overwhelmed and leaving his mother defenseless, the homeowner retrieved his handgun and shot both intruders.  The first intruder made it out the door and died immediately in the yard.  The second was ferried away by his getaway driver, who later dumped him off like old baggage in the parking lot of a nearby Zaxby’s. As both criminals were poorly dressed as police officers, if they had survived they would have just had one more charge to go against them in addition to the aggravated burglary charges.  As it stands now, one of them definitely won’t have anything to worry about anymore and the other may never see a day in court if he never regains consciousness.

Dekalb County Sheriffs and Atlanta police warn that the threat of home invaders impersonating police is a real threat.

“In true home invasions, they will attempt to portray themselves as police officers,” said Captain Nicole Rutland.

The only sad part to come of this story comes from the initial violent invasion where the homeowner’s mother was pistol whipped by one of the robbers.  She survived and is expected to make a full recovery but the costs associated with the heart attack have been very detrimental.  Thankfully, people have banded together to create a GoFundMe account for her swift and speedy recovery.

Despite being shaken up, the homeowner was able to make a pronounced appearance on FOX 5 news.  His opponents won’t be able to do the same.

For us gun owners out there, it’s important to be very hesitant to allow people to enter even when they claim to be law enforcement.  Law enforcement will had marked badges and distinct uniforms that distinguish them.  It’s never a bad thing to ask for clarification or evidence to support a person’s claim that he or she is a police officer but ultimately, use your best judgement.

Previous article: #DIGTHERIG - Matt and his Smith & Wesson M&P Compact .40 S&W Next article: [OP-ED] Tenth Week In A Row, Gun Stores Up Here Are Packed! But There's A Problem...