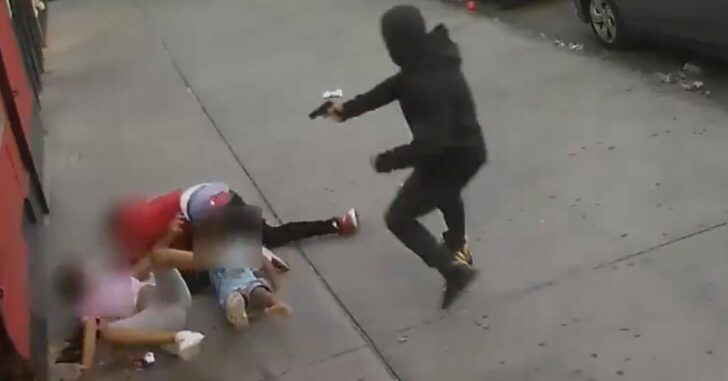 Police are looking for two men involved in a shooting in broad daylight that happened to create a dangerous situation for two children who found themselves caught in the gunfire. The man shot is said to be a member of a gang, and I can only assume that the gunman is also a part of the #thuglife.

Luckily, and miraculously, the children were not injured.

The 24-year-old man was standing on the sidewalk on Sheridan Avenue near East 172nd Street in the Bronx at about 6:44 p.m. Thursday when a gunman approached and began shooting at him, the New York Police Department (NYPD) said. But two children, ages 10 and 5, became entangled with the victim as he tried to escape his attacker, startling police video shows.

The video below is graphic in nature. Proceed with caution.

🚨Please Share@NYPDDetectives need your help identifying & locating the 2 men seen in this video shooting another man near 1551 Sheridan Ave. in the Bronx.

Yes, those are children with the victim, who were very fortunately not injured.

In New York City, it’s illegal for citizens to carry guns, with some rare exceptions. Criminals, however, don’t follow the law, and exempt themselves while others are left defenseless.

These criminals, like the one seen in the video shooting at a man with children right next to him, don’t care if innocent people get caught in the crossfire. The #thuglife doesn’t have time to address your safety and feelings.

Police are still searching for the two men. Their target was shot in the back and legs, and is being treated at the hospital. Meanwhile, the children are forever changed by this terrifying event.