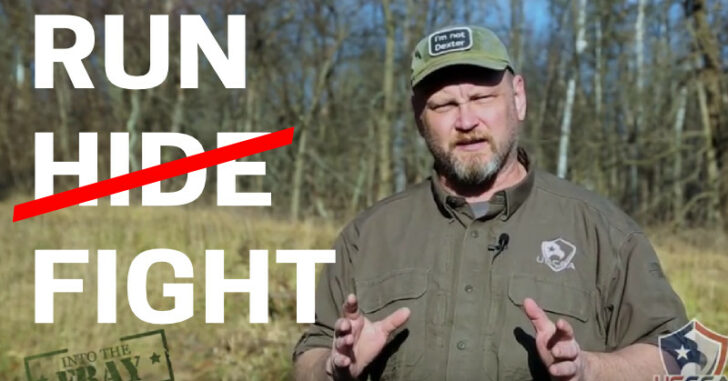 But beyond that, there are a couple crucial steps that may help you determine which course of action will work best for you.  Michalowski downplays the role of hiding because he doesn’t like the idea of hoping that an attacker won’t find him.  Personally, I think direct engagement of targets in an active shooting environment is a last possible resort.  Why?  They’re armed.  Facing them mano-a-mano without the advantage of cover, concealment, and the potential to at least observe prior to engaging all seem like a pretty great way to get shot.  But I’ve never been stuck in an active shooting scenario as a civilian so I guess if Michalowski and I are ever stuck in a real-life run-down, I guess we know our respective courses of action.

If you have an opportunity before choosing an option, I’d suggest:

Unless you are under direct attack, you will likely have some small amount of time to gather information about what is going on and engage in some course or activity whereby you are either able to evacuate to safety, barricade up in a room, or return fire on the active shooter.

This phase shouldn’t be downplayed because it’s the only time you have to initially decide friend from foe.  This gets especially hairy because unless you know:

a.) the number of assailants, their appearance, and their location AS WELL AS

b.) the number of “good guys” and their location

…Then your chances of engaging the wrong party (or being wrongly engaged) have just gone up considerably.

Single Source Attacker is usually the norm — but don’t assume

Mass shooting events, like the ones that rock the media’s world, aren’t normal and they don’t occur that often.  When they do, it’s usually orchestrated by one, sometimes two active shooters.

The natural tendency of “the herd” is to run in the opposite direction of the approximate direction from where the sounds of shooting happen.  The latent danger in that is by running from the first sound, you are inevitably rushing towards the opportunity for another.  Just because the majority of mass shooters have absolutely no grasp on the fundamentals of small unit tactics does not mean that we can all hope to be so lucky in the future.  It’s better to run for cover and concealment and try to ascertain what the heck is going on.  If there is a clear route to escape that you’re willing to bet your life on — go for it.  Otherwise, stay put and focus on getting to a place that provides some defensible degree of cover.

Also, just as a word of caution: try to verify the person with the gun is indeed the bad guy.  But that doesn’t mean revealing your position — just observe.  And if through observation you don’t see this person shooting people, don’t shoot him (or her).  You don’t have to work with that person but definitely make sure you’re not the cause of their demise.

You know what’s cool about cover and concealment?  It affords you the opportunity to identify the police and not flag them with your firearm.  It may be best to stay put and stay quiet until the situation is resolved.

Michalowski did a great job explaining a concise strategy for a concealed carrier working in an active shooter environment and it’s definitely an enjoyable video to watch.

Previous article: Sheriff On Deadly Home Invasion: If You Break Into Someone's Home, "You Can Expect To Be Shot In Polk County" Next article: Meet The New Walther PPS M2