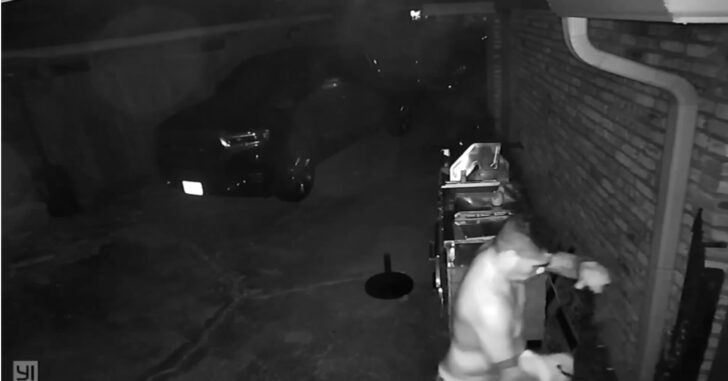 HOUSTON, TEXAS – A homeowner says he held a man at gunpoint in his back yard for nearly an hour while he waited an unreasonably long time for police to arrive. It happened around 3 a.m. in the Galleria area of Houston.

Ike Umar told reporters, “My wife woke me up, and she said, ‘Hey, I think somebody’s in the backyard.’ So, I moved the curtain, and I see a face of a guy who’s trying to look inside. My daughter’s bed is right there.” Umar then confronted the man. “I said, ‘Hey, who are you? What are you doing?’ That’s when I did my gun thing, like I loaded my gun. He heard that and just went up … his hands.”

According to Umar, the man didn’t have a weapon and told him he was trying to hide from gang members who wished to do him harm. Umar then became even more frightened for the safety of his family. “When he said gang, six men and guns, I’m not thinking about my protection. I’m like, how can I keep these guys away long enough from my house, so my daughter and my wife don’t get hurt?”

Umar said that he called 911 several times as he waited for police to arrive. “So, you’re waiting five minutes, then 10 minutes, then 15 minutes, then 20, and you’re wondering, ‘What the hell is going on?'” He says that officers told him that they had a busy night. “I don’t care what they say. There’s no excuse. If somebody’s house is broken in and I’m holding someone at gun point, I have to wait 47 minutes for help? I honestly lost total faith in HPD today.'”

The intruder was eventually taken into custody by HPD officers, and no one was injured in the incident, which remains under investigation. Local media outlets have reached out to HPD for comment but have not received a response.

Depending on your state laws, holding a person at gunpoint is shaky legal ground – especially when that person is unarmed, has not attempted to enter a dwelling, and has not threatened anyone. The homeowner’s desire to protect his family from the prowler is understandable, but what would he have done if the subject would have decided to leave? If he had chosen to shoot the man, mounting a successful self-defense claim in either a criminal or civil court would be extremely difficult, if not impossible, and could lead the homeowner to criminal prosecution and lawsuits seeking a fortune in damages.