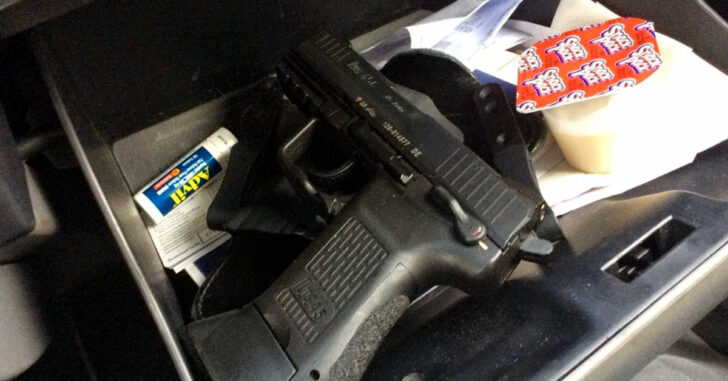 This is a situation every single concealed carrier runs into. Whether he admits it to himself or not is something else entirely. Sometimes, people just want to run into a store real quick and stow their handgun in what they believe to be a safe spot.

Five minutes in and out, what can go wrong?

Well, as we’ve covered in a recent story — everything can.

In just one recent story, we see a concealed carrier walking into an ambush right outside the front door of a convenience store. This was broad daylight. A man with an illegally obtained handgun opened fire on him in close quarters and fatally wounded him.

He had his gun on him, thankfully, and was able to return fire — hitting his assassin twice.

What would have happened if he didn’t have his concealed carry handgun?

Chances are good the assassin would have killed him and gotten away. His murder would have been nearly impossible for law enforcement to solve. Because he was armed, he was able to critically injure his attacker and force him to seek medical attention.

For criminals, medical attention usually comes with a prison sentence.

This is the worst case scenario for a concealed carrier who is armed.

Can you imagine the scenarios in which he wasn’t?

A convenience store trip or a stop into the local Walmart — it makes the same difference. If you’re armed, the best place for your handgun to be is on you.

If, however, you’re going into some place where you do not feel it is prudent to bring a handgun, strongly consider how you stow that handgun.

Throwing a gun into a center console or a glovebox provides concealment. It doesn’t save you if a carjacker or thief breaks in. It just means he has to find it.

If a car thief yanks on the glovebox and feels resistance, his first thought isn’t going to be, “I bet I should leave this alone.”

Now, walking out of a grocery store with the orange juice and a loaf of bread, you’re dealing with an armed criminal.

That’s a bad situation. And it has happened.

Don’t assume bad guys won’t look for a gun in your car.

Don’t assume you won’t need your gun while it’s not on you.

If you’re going to lock up a gun in your car, make sure it’s both in a place that is not accessible and not visible to potential thieves or criminals. The best choice is a lock box secured out of sight. The worst choice is to leave it docked on either a door-mounted holster or similar.

Throwing your gun under the passenger side seat isn’t the brightest move, either.

Where would you look if you were looking for valuables?

Handguns are extremely valuable. You should know — you bought it.

Why would you sacrifice something you’ve spent countless hundreds of hours training with to the first set of sticky hands that won’t take ‘no’ for an answer?

We’re also running into a lot of younger-aged criminals in this world. Kids with nothing to lose or — worse — something to prove. The opportunity present in a car or truck may be too good to turn away.

As concealed carriers, we cannot assume. Our lives depend upon it.

Store your gun safely in a locked, hidden container or keep it physically on your body.

Previous article: #DIGTHERIG - Jobe and his Glock 19 in a K Rounds Holster Next article: Airsoft Or Paintball For Training -- Any Benefit For Daily Carry?