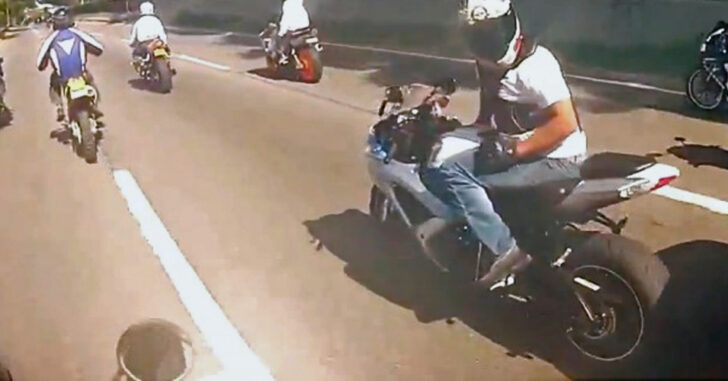 I’m sure you’ve seen the video that has been making it’s way around the internet at lightning speed that depicts a family in their SUV being attacked by a large gang of motorcyclists. In case you haven’t, here it is.

The details are slim, since a video is not available yet as to what happened before the first encounter that we see. We will be basing our reasoning on the video above, as this is what we have to go on.

As always, the following is an assessment made by us, had we been in this situation. We are not lawyers and are providing this as our opinions only. Laws vary based on States, and common sense usually prevails. If you are EVER in a situation similar to this, use your best judgement while abiding by your local, state and federal laws. Again, we don’t know what happened (if anything) before this video started. We are going on what we see in the video and that’s it.

One of the first things that we see is the SUV, filled with a Father (driver), Mother and young child, being ‘break-checked’ by a motorcyclist , seemingly unprovoked. The two make contact and once that happens, the group of motorcyclists box the SUV in.

When this happens, it is reported that some of them attempt to slash the SUV’s tires and bang on the rear window in an attempt to break it. The driver, fearing for his life and the lives of his family, try to remove them from the situation by getting away. The only way to do this at the time was to drive forward. In the process, he runs over a few motorcycles and ends up injuring one of the operators.

After this, all hell breaks loose.

The SUV takes off down the highway at a high rate of speed to try and get away. A small group of motorcyclists stay behind to help their fallen friend, while the rest speed off to catch up to the SUV. There are a few encounters until the final one, with motorcyclists getting off of their bikes to go over to the SUV to punch it (while the SUV was caught in traffic either at a red light or other obstacle). A few shots show the bikers try to box the SUV in off to the side of the road, each attempt a failure. No Way To Escape

That brings us to an intersection and red light, where the SUV is trapped and has no where to go. A motorcyclist comes up quickly to the side of the SUV, drops his bike to the ground and approaches the SUV, helmet in hand. He then takes his helmet and smashes it against the driver side window, breaking it. Remember; the SUV is now boxed in with no where to go. At this point, if not any other point leading up to this, the driver has reasonable cause for fearing for his life and/or serious bodily injury (according to us).

The end result, if you aren’t aware, was the driver getting his *** kicked after being pulled out of his SUV.

If This Were Us

If this were us in the same exact situation; As soon as the motorcyclist came to our window and began to break through, this is the point where we would decide on lethal force.  At any other time before this, we had a chance of attempting to remove ourselves from the situation and make our way to a police station as quickly as possible. There are probably many people who would have acted as soon as their door was opened by the one motorcyclist, but at this point we still had a clear route ahead to step on the gas and leave. However, we have now exhausted all attempts to leave the situation and are now boxed in with absolutely no feasible escape, and have many angry motorcyclists attacking our vehicle with the intentions of getting to us (or at least the driver).

Also it is good to note, it is reported that an occupant of the SUV dialed 911 numerous times during the chase.

What would you have done?

Previous article: UPDATE: Springfield XDs Recall - How long until I get my gun back? Next article: Concealed Nation Magazine - Help Us Make It Happen!