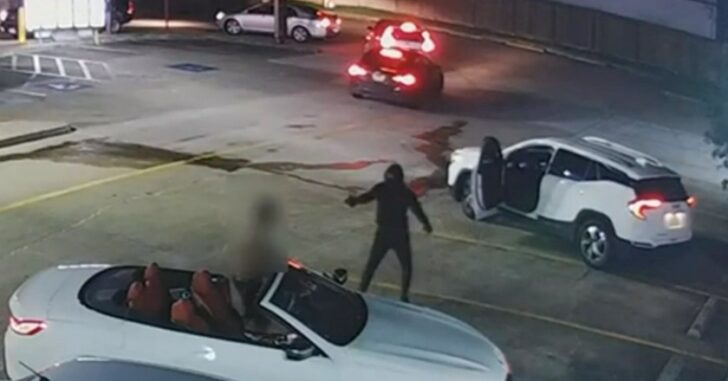 HOUSTON, TEXAS — A man pulled into a restaurant parking lot to get something out of his trunk. Before he knew it, a man had run up to him and pointed a gun in his face, demanding valuables.

The man told police he resisted the suspect and attempted to grab his own gun, but was shot seven times — once in the chest, four times in the left leg, once in his right leg, and once in his hand. While being shot at, police said the victim was able to grab his gun and fire back at the suspect, possibly striking him. Police said the victim was then able to get back into his vehicle and drive to a local hospital.

Casings from the suspect’s gun linked him to another crime a few weeks earlier where police say he held two people at gunpoint and tried to rob them.

In the second incident, police said two victims were approached by a suspect who pointed a gun at them and demanded their property. Both victims ran from the suspect, who then shot at them twice, narrowly missing them, police said.

This is a guy who will not stop until he’s stopped, and we can only hope that police catch up to him. They believe that he may have been injured after being shot by the armed citizen, but so far has not shown up at any area hospitals for treatment.

The video below shows the incident, and while it’s difficult to make out, we can see the exchange of gunfire between the two. Where the armed citizen was retrieving the gun from is not clear.

When facing a gun, make sure to have an advantage if you’re going to draw your own. Distracting the suspect is one way that could make them pay attention to something else, such as throwing your keys off to the side. Chances are, their eyes will follow and for a moment, give you time to react.

Each situation is different and while this armed citizen was shot multiple times, it sounds like he’ll make a recovery.