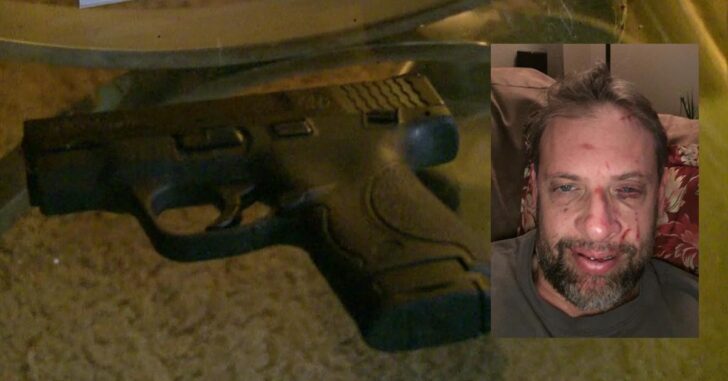 COLUMBUS, NEBRASKA — A father and son successfully fought off three home invaders in an early morning all-out fight for survival.  Columbus police confirm that there was a home invasion in vicinity of 2:30 am where three suspected attackers kicked in the front door and immediately set to assaulting the son who was first to respond.  Thankfully, his father was in the other room and able to flush out the attackers — using nothing less than his future everyday carry pistol, the M&P Shield.

“I come out and this one little one come tried to attack me and I took him out right away, one in the white shirt tried attacking me from the side, tried choking me and that kind of stuff,” says Shawn Howell, “Next thing you know he loses power and I jump up to get up and ready to start cleaning clocks but I just darted into my room… I come out and they were flying out the door so fast, I never seen anybody run so fast in my life… they knew what was coming, they knew I was going for a gun.”

According to both the victims’ testimony and police statements released through Channel 48 – Nebraska, the attackers fled before the future-concealed carrier could put bullets on target but he allegedly pursued them to their vehicle to “mark the truck”.

Both victims were transported to a nearby hospital where they were treated for superficial wounds sustained during the assault.  Both the father and son were attending a concealed carry course to get their concealed carry permits and neither were expecting an attack of this magnitude to occur in their home.

”People need to go back to being Americans and not only stand up for themselves, but our police officers, our friends, our families, our neighbors, our people we don’t know next to us you know, gives us a fighting chance.”

That definitely touches off on an important point — neither of the victims were expecting men armed with claw hammers to kick open the door at 2:30 in the morning and proceed to assault them.  As much as we’d like to credit the M&P Shield, in all honesty — it was the father and son working together to fight off the bad guys that really saved the day.  The gun, if anything, was an ultimatum: get out or get shot.

One of the creepy things about situations like this is the amount of planning these robbers had to put behind this assault.  They stacked up, kicked open the door and didn’t seem at all afraid to jump into the fray.  That shows a candid willingness to fight, inflict harm, and have harm sustained upon them that we don’t normally see in the average home invasion.  Most times, a burglar figures out someone is home and either makes the smart move to run or is so caught off guard he gets plugged.  These guys didn’t seem too concerned one way or the other and only ran when they realized a single handgun would quickly change the tide in this fight.

That’s something to consider.

In terms of both the father and son — it’s great they made it out relatively unharmed and able to defend themselves.  That’s what carrying concealed is all about and especially about protecting the ones we love from harm.  When criminals aren’t afraid to bust into a house, it really comes down to the individual to be prepared — who knows when those thugs would have stopped otherwise.