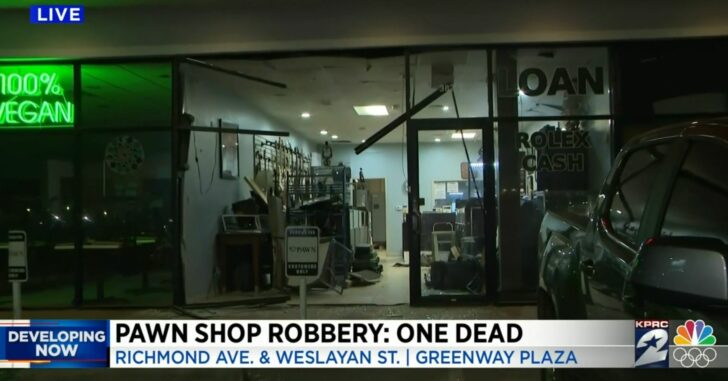 HOUSTON, TEXAS — A wild and crazy robbery attempt in Houston has left one robber dead. When one of the gunmen took an employee hostage, another employee came to the rescue. Oh, and a van crashed through the store window.

Shortly before the shooting, an argument unfurled between pawn shop employees and several customers, police said. Soon after, shots were fired by employees and a truck backed into the pawn shop’s storefront.

Although the report is a bit murky, I think we can piece together the events. It sounds like two armed men entered the pawn shop with the intention to rob it. As the robbery began to unfold, there was some resistance from the pawn shop employees, and an argument broke out.

One of the robbers decided he had enough of the talking, and grabbed one of the employees. Holding a gun to the employee, he demanded their bounty from the store. However, another store employee saw their friend in danger and acted.

This other store employee was armed and decided to take a shot on the robber holding the co-worker hostage. The shots hit the intended target and dropped the robber. The other part of this robber tandem took off and jumped into a van parked outside.

Whether it was an accident or intentional, we don’t know, but for some reason the van backed into the storefront. After smashing through the front of the store, the van then took off and sped away; leaving their dead behind.

It’s tough to fault our armed citizen on much. He acted quickly and saved the life of a co-worker. He also ended an armed robbery in progress by taking down one of the bad guys. The only thing worth considering is his decision to take the shot.

Truly, we have no idea what position he was in opposite the hostage taker. It could have been an easy shot from behind the armed robber for all we know. However, when someone has a hostage and a gun pointed at them, it obviously makes taking a shot against them more dangerous.

An errant shot could strike the hostage, or a missed shot could mean trigger squeeze from the hostage taker. Both of these situations would be pretty tragic. Fortunately, our armed citizen avoided both of these issues by landing clean hits on his target.

Kudos to the unnamed employee / shooter for his quick life saving actions. When he saw his co-worker in life threatening danger, he drew his firearm and saved the day. As mentioned above, hitting a hostage taker cleanly isn’t an easy feat. The fact that he managed to hit his target while leaving the hostage unarmed is a testament to his marksmanship.

It’s also important to note that this employee came to work armed. Pawn shops are prime targets for armed robberies. Being prepared for this kind of scenario was crucial to saving his co-workers life and stopping the armed robbery attempt.

Even if you don’t work in a frequently targeted place like a pawn shop, you should still consider carrying on the job (if allowed). These types of things can happen anywhere, at any time.