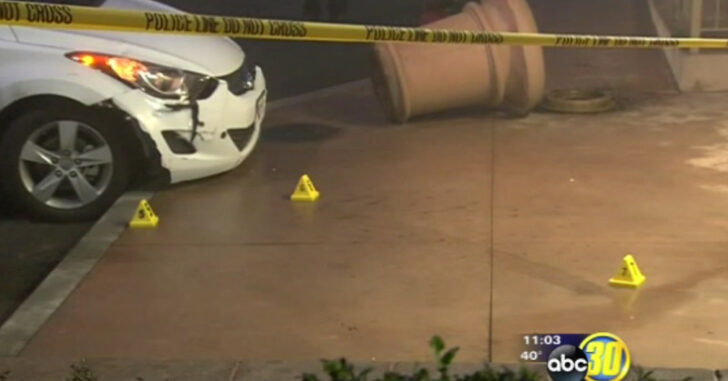 FRESNO, CALIFORNIA — A retired police officer and concealed carrier went to the ATM at 5 am to pick up lunch money before a long day.  It was then, according to ABC 30 Action News, that 32-year-old Jeremy Lynd approached the concealed carrier from behind.  Fresno police recount that Lynd then said something to the effect, “it sure is cold out here.”

That is when the victim turned around and was assaulted with a stun gun.  Lynd hit the victim once in the neck and again in the lower back as the concealed carrier went to escape.  He managed to make it back to his car and get his legal concealed carry handgun.  He then ordered Lynd to the ground, who initially complied with the request.

Lynd’s accomplice, 31-year-old Bobbie-Sue Alexandra Nicole Sevier, realized the situation was turning south and drove up in a rescue attempt.  She hollared to Lynd to get into the getaway car.  He got in and then she struck the concealed carrier’s vehicle.

Fearing for his life, the concealed carrier then returned fire on the suspect’s car — believing she would continue her assault upon him if he did not do so otherwise.  One of the rounds, according to the Fresno police, managed to penetrate the car and strike the driver in the leg.

Sevier stopped the car at some point and both suspects escaped — Lynd running off into the fog and Sevier retreating to a Starbucks where she waited for police to arrive.  Sevier was treated for her wounds at a local hospital before being sent to jail.  The main perpetrator of the crime, Lynd, is still at large.

Apparently, neither had done their homework on the victim or they would have discovered he had fourteen years of service in law enforcement prior to his current occupation.  That would have been a good detail to know prior to an attempted robbery.  The second piece would be that he is one of the few legal concealed carriers in California.  That, too, should have cued them that this was a poor idea.

The only short-sighted feature to this exchange was that the concealed carrier was not armed when the assault took place.  He had to retreat to his vehicle to get his gun.  If this isn’t a constant thing we don’t discuss in concealed carry — keep your gun on you at all times, even when you think there’s nothing to worry about.

It’s good to see this concealed carrier made it out safely and at least one of the criminals was put behind bars.