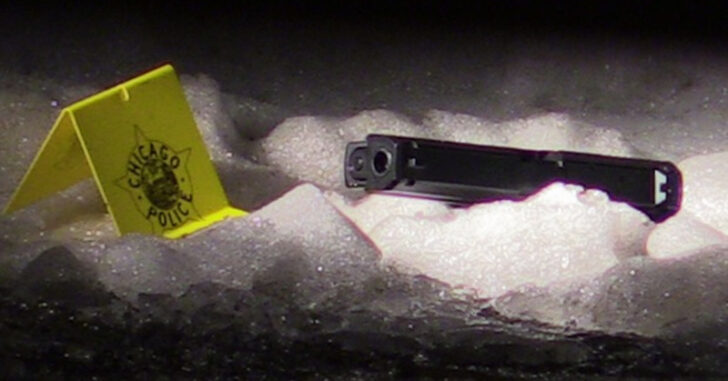 CHICAGO, ILLINOIS — Just another day in gangland paradise!  In Chicago’s infamous South State Street, a 57-year-old man had a gun held on him by a 20-year-old robber.  The older man managed to draw his concealed carry pistol and shoot the robber in the elbow.  The robber, in retaliation, got into his car and ran the man over — putting him in serious condition.  According to DNAInfo, the robber was apprehended by police after seeking treatment at a nearby hospital and the victim is still in the hospital listed in serious condition.

Judicious shot placement is a hard thing to do in a moment of stress and panic.  That’s why we stress the importance of regular training and firearm familiarity.  Obviously, we always shoot to neutralize the target, but the most important thing is to continue to apply judicious force until the target is neutralized, retreats, or surrenders.

Sometimes that’s confusing in the concealed carry community.  That means if a guy with a gun is on the ground and keeps moving to aim — he’s still a threat.  If he retreats to his vehicle and decides to use that vehicle as a weapon — threat.  Use as many rounds as you need to in order to save your life and always adhere to the principles of firearm safety.

For those out there hoping for a good end to this story — unfortunately it’s really not there.  What I will say is that it’s important to keep standing up to these Chicago crooks.  They have absolutely no problem killing their own, others, or bystanders.

To be honest, we like to classify terrorist threats all the time but we never like to label guys who literally killed 4 people and sent another 16 to the hospital in the same 24 hour period.  Irony prevails as that bloody occurrence happened mere blocks away from Chicago Mayor Rahm Emmanuel.  It’s getting harder and harder for Mr. Emmanuel to step out of his fancy Chicago home in the morning and make it to his armored limosine without stepping in pools of blood.

Concealed carry doesn’t guarantee success.  With training, practice, and proficiency, you can up your chances of going toe-to-toe with guys who don’t take prisoners and don’t care how bad it hurts.  Here’s hoping this concealed carrier makes a speedy and swift recovery.

Previous article: Student In Fear Of His Life Had No Other Option But To Hide On Campus Next article: [CCW IN ACTION] Concealed Carrier, Vietnam Vet Beats Armed Robber On The Draw