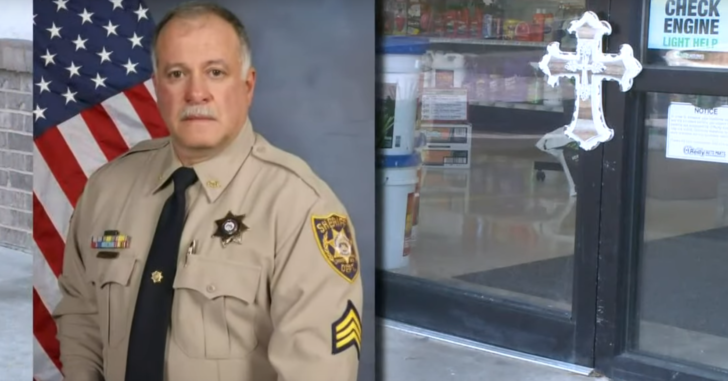 GWINNETT COUNTY, GEORGIA — Felix Cosme wasn’t going to let the armed robber hurt anyone at the store he worked at. As he came out of the back room and saw the armed man, he took action. Unfortunately, he was shot and killed while trying to protect others; but he made sure no one else was hurt.

Gwinnett County Police responded to the Hamilton Mill Road area outside of Buford to reports of a person shot at an O’Reilly Auto Parts store around 8 p.m. That’s where they believe a black male suspect entered the store followed by a female employee after she had helped a person outside.

The suspect then demanded the cash drawer which got the attention of a male employee who came out of the back and attempted to draw his weapon. The suspect responded by opening fire and killing the male employee.

Cosme began his law enforcement career way back in 1979. He worked in multiple places and departments over the years. Cosme joined the Gwinnett County Sheriff’s Office in 2006. He served as a sergeant in the jail administration until his retirement in 2015.

The local community has rallied around this tragic event. Cosme is being remembered as a hero for his life in service. At his funeral several days after the event, he was honored by many current peace officers with some leading the procession by motorcycle and others standing along the route at attention.

This tragic incident is a great reminder that making the decision to draw your firearm can be life threatening. Despite Cosme’s years of police service and training, the armed robber was still able to get the shot off first. Until we reveal out firearm, we are often seen as just a bystander. Potentially, we may go unharmed during a robbery like this.

However, once we draw our weapon and actively become part of the scene, anything can happen. Training can put the odds in our favor to come out of these situations alive. Yet, nothing is guaranteed. This is just something to think about before you engage. Is what you are about to do worth risking your life an the lives of others around you? If you are even considering it, the answer is probably going to be yes.

Previous article: Are You Mentally Prepared For A Self-Defense Encounter? Next article: Yes, This Is Real: Stormtrooper Disarmed, Police Find Plastic Gun