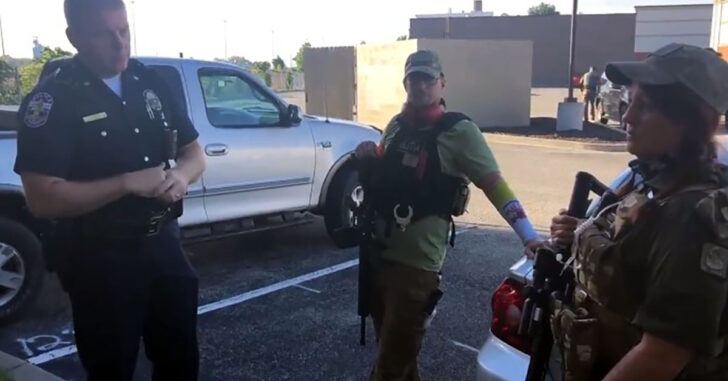 This isn’t slowing down anytime soon, and I get that people want to do something to try and protect their communities. It’s a slippery slope, and one that needs to be navigated quite carefully.

An officer with the Louisville Police Department was seen on camera speaking with a group of armed citizens. In the video, he’s telling them areas to avoid, and giving general guidance so that they aren’t breaking any laws.

“I don’t want any of that kind of stuff to happen, OK?” he is heard telling the woman.

“If you go down there, if you choose to, there is a grassy area along the north side of the road. Those people who want to come down today to exercise your second amendment rights or your first amendment rights…”

The woman quickly makes it clear by saying “we’re not protesters,” and the officer replies: “Fantastic.” The woman continues: “That’s not what we’re here for, that’s why we’re sitting over here.”

The officer continues: “I’m going to watch over and protect everybody, that’s all I do, right? Just be prepared later on today there will be several hundred, several thousand [protesters]… but don’t try to come on Central, and don’t try to take that south sidewalk, I don’t want any of that kind of stuff to happen, OK?”

The woman concluded by telling the officer that they would not be with the protesters, and that they all wear orange so that they’re easily identifiable.

#Louisville Police giving armed MAGA militia members directions on where to stand, what to expect, which streets to avoid.pic.twitter.com/UO9U64jWMr

In my world, I stay as far away as possible from the protests, because they all too often mean violence after dark. It is the right of these armed citizens to go out with their firearms, but for anyone doing so, please be careful and mindful of the situations that you could face.

Previous article: Grandma Foils Intruder's Plans: "I reached over and got my shotgun, and I cocked it" Next article: 21-Year-Old Dies After Being Shot In The Head Inside Philly Laundromat