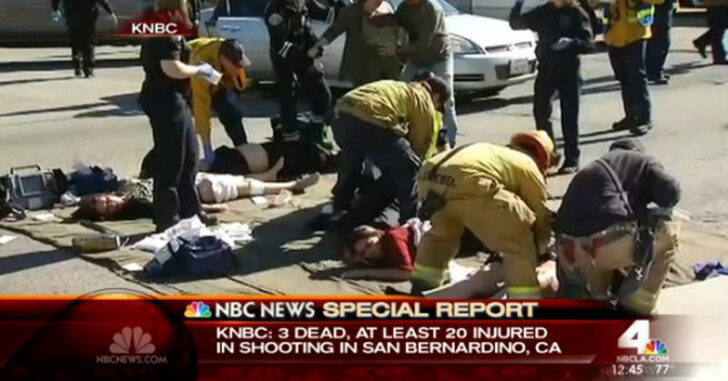 A live feed from NBC News is being provided below:

SAN BERNADINO, CALIFORNIA — At approximately 2:26 PM PST, the San Bernadino County Sheriff’s office confirmed they were responding to an active shooter in vicinity of the Inland Regional Center.  The Inland Regional Center houses several businesses that assist people with developmental disabilities.  According to CNN, SWAT teams are moving through the complex, systematically clearing them.  Initial reports suggest that upwards of 20 people had been shot.

The Loma Linda University Medical Center is taking in victims from the shooting as law enforcement move in to clear the facility. As you can see from the aerial view of the complex, there are quite a few large buildings which will need to be individually checked by SWAT and law enforcement prior to nailing down the bad guys.

Witnesses told police they saw three men.  There was a suspicious device believed to have been left behind by one of the gunman and the bomb disposal unit is currently en route to deal with that.

The Inland Regional Center is a state-run facility for people of many different age groups to seek treatment and support for developmental disabilities.  Their website is down as of Wednesday but NBC had this to say:

Judy Mark, secretary of the Board of Disability Rights for Northern California, told NBC News that both clients and social service workers come to the IRC, which is the largest of 21 non-profit agencies that work with the state of California catering to people who have developmental disabilities such as autism, cerebral palsy, and epilepsy.

“You will see clients in and out for meetings,” she said. “There are support groups. Children who are between the ages of 2 and 3 years old go there to get diagnosed with a disability.”

As this event is on-going, we will be updating it once new information arrives.

Deputy of Public Affairs for San Bernadino County, Olivia Bozek, reports that police officers are continuing to clear the buildings and there is no comment on whether or not the shooters have managed to escape the scene.