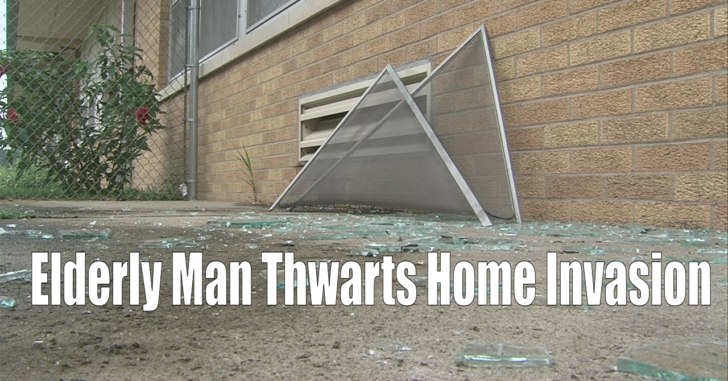 When people hear you’re 70 years old, they may think you’ve begun to slow down with age.  In the case of this attempted home invasion in Sullivan County, Tenn., apparently not slow enough.  Ronald Dykes, living alone in his home, heard an intruder coming in through the window at night and successfully hit the burglar.

Around 2 a.m. Sunday, a man entered the Sullivan County home of 70-year-old Dykes through the bedroom window. Dykes said he had just seconds to act, so he pulled out his gun and shot, hitting the suspect.

Dykes told us he just finished boarding up another window after someone broke in back in April. Officers found the suspect after he escaped and checked into Holston Valley Medical Center with gunshot wounds just moments later. Charges are pending against the suspect. In Dyke’s case, he’s protected by Tennessee law.

Sullivan County Sheriffs Department, when they arrived on the scene, were quickly able to apprehend the burglar when he – understandably – arrived at a medical facility with a gunshot wound.

It’s become an all too common situation where burglars will scout the homes of the elderly and see them as easy targets.  Often living alone or with little supervision, they’re seen as veritable treasure troves of valuables and given little consideration.  Just like this tragic home invasion that happened in early May, where an elderly couple was targeted – criminals often don’t consider the lives of their prey when it comes to burglary.  As such, why should the home owner make any consideration at all for the burglar?

Thankfully, in the state of Tennessee, authorities recognize the inalienable right for a homeowner to use lethal force to protect himself and his property.  This term is commonly referred to as “Castle Doctrine” but ultimately, it comes down to the state to specifically define the words they choose to use.

As Sullivan County District Attorney General Barry Staubus pointed out in his statement,

“It has to be a reasonable defense of your home and you have to be in imminent fear of death. If those things exist, then you have the right to defend yourself.”

There is not a single day that goes by in the United States where someone isn’t attempting to forcibly enter another’s home.  Sometimes the intentions are simply to secure their goods and other times, they can be much more nefarious.  In either case, criminals are not hampered by the concept of either the legality of concealed carry or the use of firearms.

Thus it comes down to the home owner – whether he or she be elderly or young – to understand how a home defense plan plays into readiness for such an event.

Facing Realities of Aging with the Need for Safety

Firearms are tools best used by capably minded and able-bodied people who can reliably store, maintain, and use them while still adhering to the fundamental principles of firearm safety.  As one scientific study in the American Journal of Public Health discovered, there is an increasing segment of the elderly population applying for concealed carry weapons permits.

It’s a big consideration for both elderly people whom live alone with no supervision.

And, it’s all the more reason why senior citizens ought remain proficient in both their concealed carry fundamentals as well as firearm safety so long as their mental and physical capacity to do so remains intact.  With burglaries like this one unfortunately not yet the norm – it’s time to flip the script on criminals with absolutely no regard for their victims’ well-being.

Previous article: Detroit Woman Saves Herself From Carjackers Next article: Harbor Freight: JK, You Can Carry In Our Stores