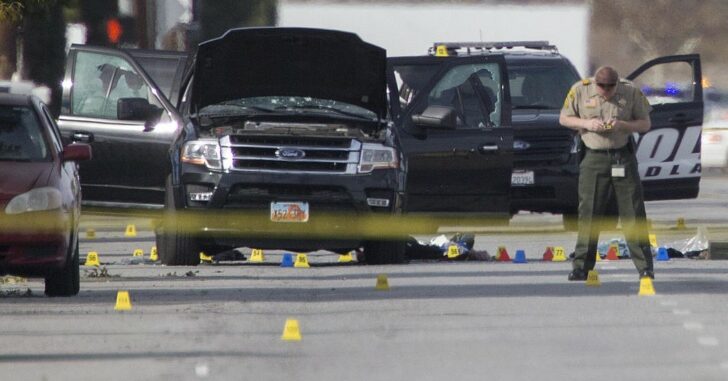 The political landscape surrounding gun control always ignites after horrible events like the one we witnessed yesterday, yet I can’t help but wonder why some people immediately call for more gun control without any facts.

As we have learned over the last 24 hours, all of the firearm used in this mass shooting were purchased legally in the state of California. That state, with the toughest gun control laws in the country, already bans high-capacity magazines and ‘assault weapons’.

The LA Times reported that the firearms were purchased legally, as stated by the ATF. This would indicate that during the transaction, the purchaser would have been required to pass a federal background check.

These firearms were also purchased four years ago.

According to a recent New York Times article, the purchases were split up between two people:

The two handguns that were recovered were bought by Mr. Farook, and all four weapons were bought legally**, Chief Burguan said. A senior federal law enforcement official said the assault rifles were bought by a third person who is not considered a suspect.

**Side Note: Realistically, every firearm had it’s start as a legal purchase.

It was also noted that the pair had many rounds of ammunition. “When they searched Farook and Malik’s home, police recovered a dozen pipe bombs, 2,000 9-millimeter handgun rounds, 2,500 .223-caliber assault rifle rounds…”, and let’s sit back and wait for legislation that would tell law-abiding citizens how many rounds they are able to purchase. This much is certain; I own thousands of rounds of ammunition as well. The difference? I am one of millions of law-abiding citizens who will never use them for harm, unless in the case of self-defense.

There was a mad rush to call for more gun control immediately following the incident, even before facts were laid out on the table. Shannon Watts, founder of Mom’s Demand Action Against Gun Violence, was seen on MSNBC just hours after and began calling for stricter gun control laws.

Little did she know, the firearms were legally purchased by people who did not raise any suspicion. And, they were purchased in California.

Speaking of Shannon Watts, she authored an article on MSNBC titled “Don’t believe the hype: Common-sense gun laws work” after this fact was made public, yet still calls for expanding background checks as a way to save lives.

There is no one thing that can stop every instance of gun violence in our country – California, after all, is one of the 18 states that requires background checks on all handgun sales. But it is simply not true that gun laws don’t make us all safer. The evidence is clear that common-sense laws keep guns away from dangerous people and save lives. Everytown for Gun Safety research shows us that In states that require background checks, there are 52% fewer mass shootings, 46% fewer women shot to death by intimate partners, and 48% fewer law enforcement officers killed with handguns.

So while the gun lobby will try to tell you that gun laws don’t work – and that criminals will get their hands on guns anyway – look at the facts, and then join us to make our communities safer. Since 2012’s shooting at Sandy Hook Elementary School in Newtown, Connecticut, we have passed background check laws in six states. We are now working to pass background check ballot initiatives in Maine and Nevada.

Reminder: These firearms were purchased legally, and the purchasers completed and passed the required background checks.

Let’s turn the conversation to concealed carry and hope that Mrs. Watts will reach out to me with a statement.

First, I’m looking at you, California. As one of the toughest places in the country to obtain a permit to carry a concealed firearm, it more than hinders an honest citizen’s ability to properly defend themselves in an instance such as this. Around 100 people were at yesterday’s targeted location, and not one was properly equipped to fight back against that wretched evil they faced.

I wholeheartedly believe two things, and I believe them to my core:

A large part of Concealed Nation over the years has been to document cases of legally armed citizens defending themselves against the bad guy. These instances are severely under-reported because the mainstream media wouldn’t profit off of them like they do with mass carnage and terror. Yet, I know the truth is out there, and it’s in the form of law-abiding and armed citizens who look to take control of their personal safety.

Bad guys in this country aren’t going anywhere, and neither are the firearms. What it’s really time for is a monumental shift of citizens being able to properly defend themselves if they are faced with danger. As the editor of the leading concealed carry website in the world, I see that shift happening.

I will close with a quote from Mr. Colion Noir, one of the wisest men in the industry:

“They abandoned their 6 month old just so they can go slaughter [people]. There’s not enough gun control on the planet to deal w/ that type of evil.”