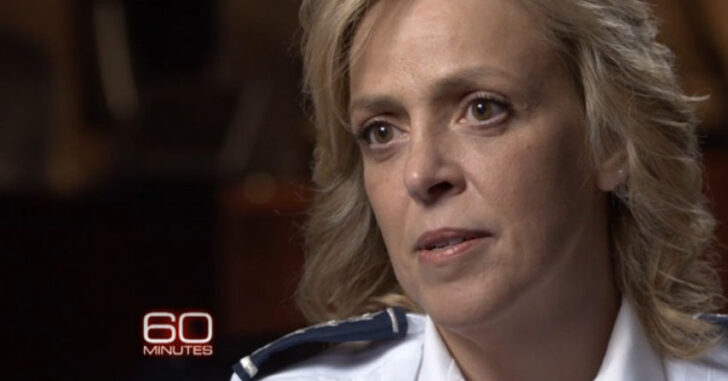 While I’m still picking my jaw up from the floor, DC Police Chief Cathy Lanier has changed her tone on what to do if you ever find yourself in an active shooter or terrorist attack situation. It’s the exact opposite of what police have been telling the public for decades.

In an upcoming interview with 60 minutes that will air Sunday night, Lanier sits down with Anderson Cooper to discuss these topics and how things are changing in policy and in our world as a whole.

“Your options are run, hide, or fight,” says Lanier. “If you’re in a position to try and take the gunman down, to take the gunman out, it’s the best option for saving lives before police can get there,” she tells Cooper.

She goes on to say, “The fact of the matter is, most active shooters kill most of their victims in 10 minutes or less, and the best police department in the country is going to be about a 5-7 minute response. I always say if you can get out, getting out is your best option. If you’re in a position to try and take the gunman down… to take the gunman out, it’s the best option for saving lives before police can get there.”

In closing, Lanier makes a great point which will lead me into a point of my own regarding the carrying of firearms for self-defense. Her ending statement in the video below is as follows: “If you educate people on actions they can take to reduce their risks, then you can save some lives and I think it’s irresponsible for us not to do that.”

The end result is Lanier being worried that people will ignore and not prepare themselves for what is happening around them and called it a ‘numbness’.

Here’s the segway from myself and Concealed Nation to DC Police Cheif Cathy Lanier; people do want to protect themselves and they do want to be prepared for any event that they may find themselves in one day. Across the country, people are applying for pistol permits at extremely high rates because of this very fact. In DC, however, any resident looking to carry a firearm is extremely hindered by the long, expensive and restrictive process that your department has outlined in order to obtain a concealed carry permit.

That policy in itself is counterproductive, because it turns many away from the entire concept of concealed carry, as they look at the process to obtaining one and do not even make the attempt. After all, the approval rate has been dismal at best.

We ask you, Cheif Lanier, to reconsider your current procedures in place. We ask that you allow your law-abiding residents of DC to be able to obtain their concealed carry permits with much more ease, so that they can be properly prepared in the event of the unthinkable.

This is the responsible thing to do.

Previous article: Got Faulty Ammo? Man Pulls Trigger On Trespasser With Gun, But No Boom. What's Your Backup Plan? Next article: The Right To Defend Yourself?! Preposterous! Texas Universities 'Brace' For Concealed Carry On Campus