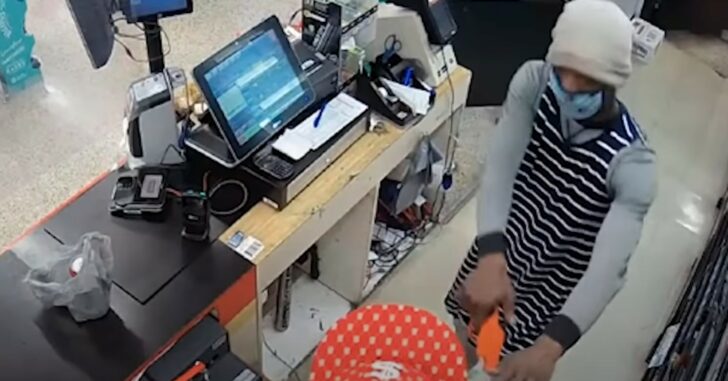 First off, this is a dress, right? If it’s not, then I don’t understand.

Anywho, this guy bought a beer at a convenience store and then came around to the other side of the counter with his… flare gun. That big orange intimidating tool was enough for the cashier to kinda comply with the dress-wearing man child, and he ended up getting away with a few bucks from the register.

As far as taking this guy out, there were multiple opportunities that presented themselves. The cashier decided not to act, however, and that’s fine. The options were there for those who would have made a move, whether it be tackling or drawing a firearm.

Police are apparently still looking for this guy.

Remember; anything can happen. This isn’t the first flare gun holdup we’ve seen, and it won’t be the last.

Previous article: 1 Dead, 14 Injured In Shooting At Popular Bar In St. Paul Next article: Man Shot By Police After Doing Everything Wrong When He Called About Trespassers On His Property [VIDEO]