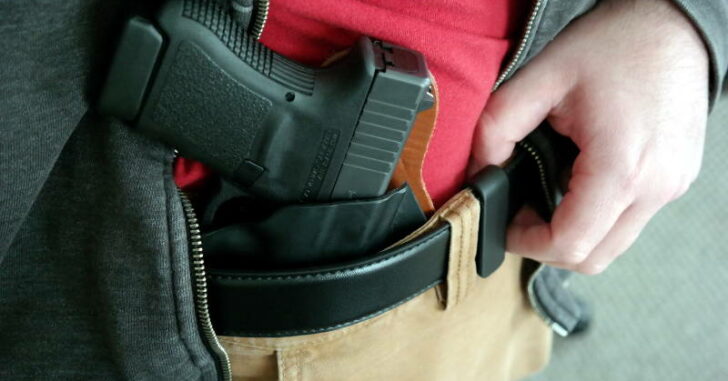 COLUMBUS, OHIO — Ohio legislators in the House have approved measures to increase the number of places concealed carriers are allowed to go with their concealed carry handgun.  The measure passed and is being lauded as a way to clean up a wide variety of mostly unintentional offenses.  As the Columbus Dispatch reports, House Bill 48 would allow:

This bill, which passed without any major dissent, was voiced as a means of reducing “undue burden” upon concealed carriers.  Many concealed carriers, who either may not understand all the nuances of Ohio gun law, have fallen prey to being tagged for carrying their firearms.

One such area noted in the Columbus Dispatch is a spot on Lane Avenue where the sidewalk crosses into campus property.  A law-abiding concealed carrier could consequently be stopped and be in violation of the law for carrying his or her concealed firearm — a problematic issue.

“These are places you could be inadvertently creating a felony,” Rep. Ron Maag, R-Lebanon, the bill sponsor, said.

Mike Newbern, an organizer for campus carry in Ohio State universities, said to the Dispatch, “universities operate in a microcosm where criminals retain the upper hand.”

This isn’t just about enabling concealed carriers to do things they ought to already be able to do — it’s about reducing the number of frivolous charges placed against people who have busy schedules that may conflict with the myriad number of “gun free zones”.

This enables parents to go into schools and actively participate with their children versus worry about the strict “pick up and go” policy currently in place.

And lastly, it enables university administrators and students to have a pro-active discussion about the role of civic responsibility on their campuses versus having a blanket felony offense being cast against any who simply wish to defend themselves.

If this is just sounding like common sense legislation to stop turning law-abiding concealed carriers into felons, then you’d probably be making too much sense.

Let’s hope, for the state of Ohio and concealed carriers everywhere that this sort of legislation only becomes more common place.