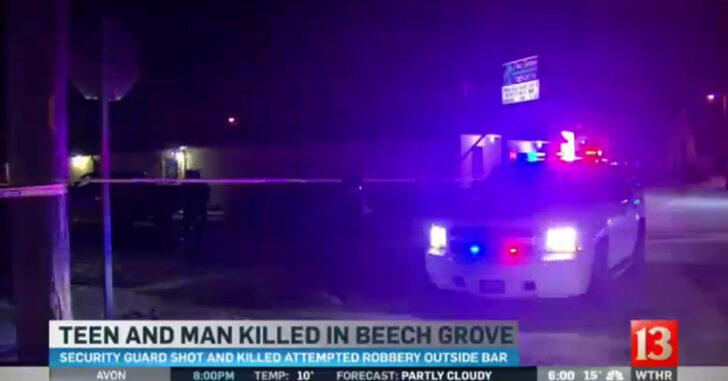 BEECH GROVE, INDIANA — Two armed suspects were fatally shot outside a bar and eatery in Beech Grove after they attempted to rob a mother and son security team patrolling outside the area.

According to a statement by Beech Grove Mayor Dennis Buckley, one of the suspects was identified as 29-year-old Seth A. Easley and the other was a 14-year-old boy who has not been identified at this time.

“The child demanded everything you have from both security guards, including a cell phone that was laying on the lap of one of the security guards,” Beech Grove Mayor Dennis Buckley said.

The security team were in a vehicle outside the eatery. The time of the event was around 1 o’clock in the morning. After the 14-year-old and 29-year-old criminals were seen roaming around the entrance of the establishment, security rolled up. One of the security members began calling 911 when the duo were approached by the 14-year-old. The teenager brandished his gun and demanded their possessions. The security team fought back, engaging both suspects with their handguns.

While the Beech Grove mayor recalls this event as a tragedy, it highlights the reality of crime in America. The bad guy may be little more than a kid with a chip on his shoulder, a stolen gun, and something to prove.

In either case, both the boy and his gang handler are dead.

We’d love if the story ended with something else less absolute than death but the sobering truth is that if that boy wanted to live in the first place, he shouldn’t have shoved a gun in someone’s face.

Security guards and store clerks — these are the most common recipients of gang violence because they’re visible and often in places that are poorly protected. Surprise, surprise, these are also the two groups of people that are investing heavily in their own personal protection.

Concealed carriers sometimes get caught in this mess, too. A lot of gangs send young boys off to conduct armed robberies and malicious criminal activities as a means to “prove their worth”. Much like child soldiers are employed in extremely poor countries, we’re now seeing this tactic brought to America.

As a gun owner, it only means one thing: if you’re not carrying everywhere you go, you’re setting yourself up for failure.

I don’t pretend for a second that some 14-year-old boy understands the full ramifications for his actions if he’s stupid enough to point a gun at an armed security guard.

Does this kid — who never took a gun safety class in his life — understand what happens if he applies just a tad more pressure to the trigger? How much does it take for a loaded gun to go bang?

I carry concealed every single day and I suggest my reading audience do the same. I train with my concealed carry gun because I understand precisely how much pressure it takes to make a handgun fire. The answer is not much. And if it’s a teenager pointing a gun at me and he’s nervous enough, I know my life is as good as gone unless I plan on defending myself.

Previous article: Machete-Wielding Man Grazed By Homeowner's .22LR Pistol, Amazed Homeowner Tried To Shoot Him -- Still Doesn't Understand Why His Bail Is So High Next article: Father Dies Protecting Family In His Own Driveway -- Hard Decisions And Hard Consequences