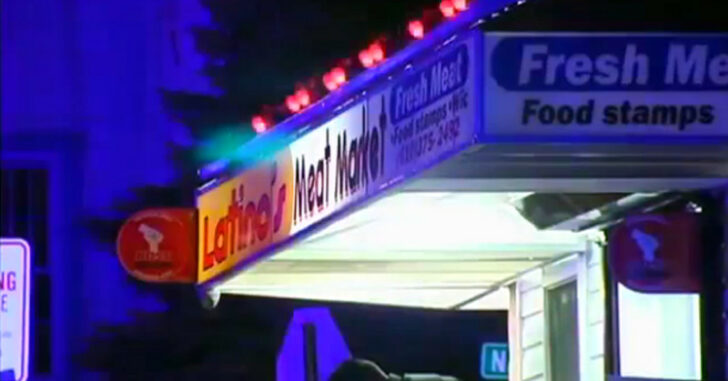 READING, PENNSYLVANIA — Three robbers thought they were in for easy pickings when they tried to sack Latino’s Meat Market in Reading.  To their surprise, two of the employees were armed.

WFMZ-TV reports that at least two of the robbers appeared to be armed from surveillance footage.  They entered into the Latino Meat Market at 11 PM, where they encountered at least one customer and two employees.  Police say the robbers managed to withdraw the cash before both employees engaged the two armed robbers with their own personal handguns.  One armed robber was declared dead on the scene and the other died a little while after he got to the hospital.  The third robber managed to escape with the money and his whereabouts are unknown.

No honor amongst thieves, I guess.  Then again, if they thought they were going to overpower employees and customers with illegally obtained firearms and numbers, those robbers were sorely mistaken.  Two of the three will never repeat that mistake ever again.

No customers or employees were injured though one of the employees received a superficial cut across his nose.  He refused treatment.  Reading Police said in a brief statement that based upon the information provided by the business and gathered through witnesses, it appears this is an open and shut case of self-defense.

Judicious aiming, coordination, and straight-up teamwork — that’s why it’s getting dangerous to be a thug.

Previous article: If You Didn't Know, Now You Do: Time Warner Cable Doesn't Like Your Legally Concealed Firearm Next article: How To Talk To Businesses That Ban Guns