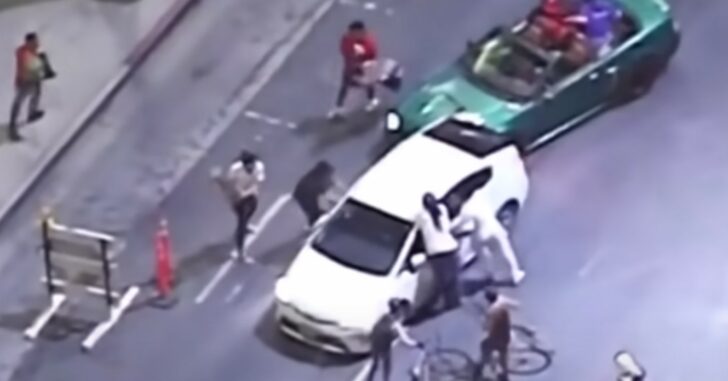 This is an all too familiar scene that we’ve seen play out time and time again this year. What start out as protests can quickly turn to riot situations with no shortage of violence.

In this instance, well, take a look for yourself.

Hollywood, California: This is not a scene from a movie – this is a Toyota Prius driver chased down by a truck full of BLM rioters and a second protest related car, they attacked the driver when they managed to stop him. The driver passed a Black Lives Matter protest blocking intersection traffic.

“Prius drives through a protest in Hollywood, protestors then chase the vehicle down, smash the windows with a skateboard while attempting to pull the driver out of the car. The driver then speeds away and is pulled over by LAPD and handcuffed” [Kenny Holmes]

Here is the incident from another angle:

Prius chased down by a truck and a Mustang full of BLM thugs, they smash the car, tried to pull out the driver 🤯 The driver drove thru a Breonna Taylor protest blocking an intersection in Hollywood, he did not hit anyone! 👏🏻 These are the thugs virtue signaling white people supports, these are the thugs celebrities support… the same celebrities & influencers telling everyone how to feel about Breonna Taylor 🤦🏼‍♂️ #BLMthugs #BLMrioters #Riots #Rioters #BlackLIESmatter #BreonnaTaylor #LAriots #BLMprotest #Demonrats ~ #TrumpTrain2020 #AmericanPatriots 🇺🇸 [Footage source: ABC7]

If anyone knows the outcome of this, eg. if the driver was arrested for anything, let us know. From the video, he doesn’t seem to be doing anything wrong, and looks as though he was simply trying to drive down the street.

You know, where cars belong.

Previous article: Let's Talk About Knives, Baby. We're Kicking Off Knife Reviews Shortly! Next article: Resident Fires Back At Armed Home Invaders, Enough Persuasion For Them To Run Off