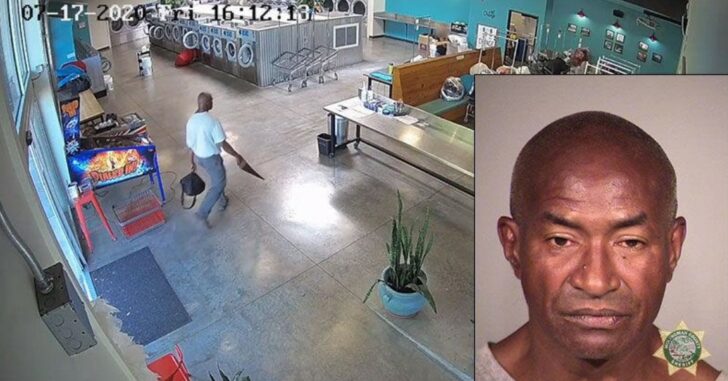 I’ve watched many videos over the years like this, and what I wish for the most is that an armed good guy came into frame. It’s not always going to happen, of course, but it’s a sad reminder to people everywhere: No one is coming to save you, and it’s up to you to be ready to defend yourself.

The two women in the video below were nothing close to prepared for this attack, and they had plenty of time to react. I hate to use them as an example, but it’s important to know that evil people will do evil things, and you could be in their path one day.

A firearm would have been a great deterrent in this instance, or a great tool to stop this threat in his tracks. Some OC Spray would have good as well, especially given the fact that the first woman was watching the man closely as he approached.

The video below is graphic in nature.

Luckily for the two women, he stopped the random attack and left the location.

Police soon caught up to him, only to run into difficulties with bystanders, who began taunting the officers as they tried to get the suspect in handcuffs without shooting him.

The officers used less-lethal munition against the suspect, and he threw down the handsaw.

Police said they continued talking to him to deescalate the situation, however, “several bystanders interrupted their conversation with him by screaming and taunting the officers, only increasing his level of agitation again,” according to the Portland Police Bureau.

If the taunting had anything to do with the Black Lives Matter movement, these bystanders should be absolutely ashamed of themselves. Not only did they put everyone’s lives in danger, they didn’t even understand the context of what was happening — and what had already happened.