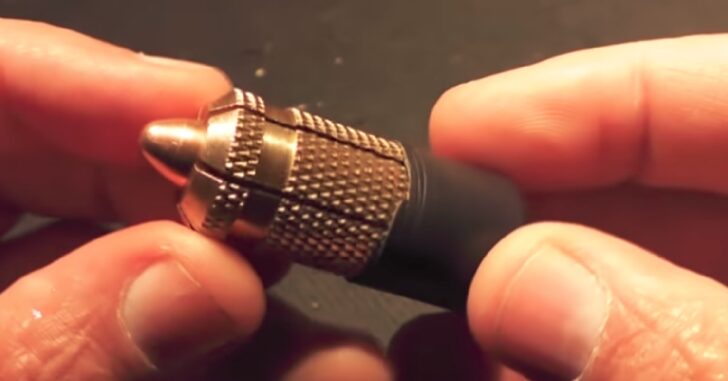 There’s something really special about being able to watch the cutting edge of firearms and munition evolution with the technology we have today.

Part of being able to watch how firearms progress is getting to watch goofy, colossal failures — like the whole “extra round in a shotgun” concept.

YouTuber Taofledermaus got just such a munition from Germany, and although it is terrifying as hell, it’s not the most effective thing on earth. The shell can report rounds as big as the 7.62×39 inside to detonate on impact with an intended target, so you’ve got a modified shotgun slug hitting your target and then a fresh round delivers a second punch.

It’s cool in theory, but there’s a whole lot wrong with it.

As shown in the video below, these rounds just tumble like a bumble bee shaken in a jar. It’s not outside the realm of possibility to have a round do a 180° and detonate in your direction — super yikes.

Take a look at how Taofledermaus described it:

I got these slugs from Germany in June and I have been trying to figure out a safe yet exciting way to demonstrate them. These were designed to fit a 9mm round inside them. Without a round, they weigh 1.5 times the weight of a 1oz. slug. This required a carefully researched powder load. These were fun slugs because they were relatively accurate and the fragmentation and power was unexpected and giggle-inducing. These were meant to be shot through either a rifled choke or full rifling to obtain spin-stabilization, but because I was leery about the tolerances, we shot them through a cylinder-bore for safety.