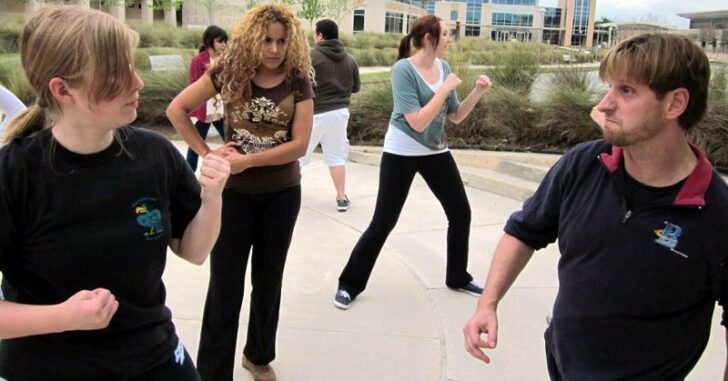 An often occurring question that crosses every concealed carrier’s mind is: when is the right time to draw?  As we learn and become aware of the growing firearms community, we see some of the shocking and unbelievable circumstances that can sometimes occur doing routine things in life – like going to the grocery store.

Today for example, I came across a video on my Facebook news feed of a fight breaking out in the middle of a Costco in my own home town.  The fight was brutal, sudden, and escalated quickly; as dangerous situations can often do.  All I could think of while watching the video was – what if one of them where armed with a weapon?

There were kids around, what if one of them got caught in the fray and injured?

Is It Justified To Break Up An Altercation By Drawing Your Gun?

Would you – as a concealed carrier – get involved in the altercation and try and break up the fight?  My opinion on the matter is rather simple.  Where I’d like to do the right thing and break up the fight, I also don’t wish to give either one of these adults access to my firearm should the unthinkable happen.

Also, I don’t view this situation as being extreme enough to warrant drawing my firearm on either of the fighting adults.  My life isn’t currently in danger.  And there are bystanders gathering around that I have to consider before I draw my firearm in the first place.

Conclusion:  No, at this point I wouldn’t draw my firearm nor would I put myself in the middle of the fight.  However I would call the police and ensure the situation didn’t escalate further.

What If You’re Involved In A Physical Altercation?

There is always the existing question of when to draw if you are involved in a similar altercation.  Take the same mentioned situation for example.  You’re being harassed by a fellow patron at a store.  They are obviously being aggressive and unwilling to be calm and collected about the matter.  The altercation turns physical and at this point you have to consider when and how you should draw your firearm.  Do you wait until you fear for your life or do you draw the line sooner than that?

Everyone is different.  We all have different skill levels when it comes to firearms handling.  If you’re confidant in your abilities in hand-to-hand combat, then your biggest concern should be not hurting the other adult too badly.  And even then, your primary concern should always be putting distance between you and an attacker.

If you’re not so confidant in your abilities and are being subjected to a physical assault, then your main concern should also be putting some distance between you and the perpetrator so as not to give them access to your firearm.

Once that distance is achieved, and they persist, then it is up to you if you feel your life is threatened and require the use of your firearm.  However, you’re also responsible for how you use that firearm.  Just like a recent example in Spokane, Washington, a guy intervened in an altercation only to get sucked into one.  Once there, he was beat up pretty bad.  After the attacker went to leave, the victim took out his gun and shot the attacker in the back.  That’s how a physical altercation goes from justifiable self-defense to straight up manslaughter.

Getting some distance between you and the attacker is paramount.  Not only can space give you room to draw – if need be – it can also act as a chance to de-escalate the situation.

In conclusion, don’t get involved in other people’s fights while you’re carrying concealed.  Call the police.  If you do get sucked into a physical altercation, fight to get distance from your attacker.  If he advances after that, then decisions have to be made as to whether you draw your concealed carry pistol or not.