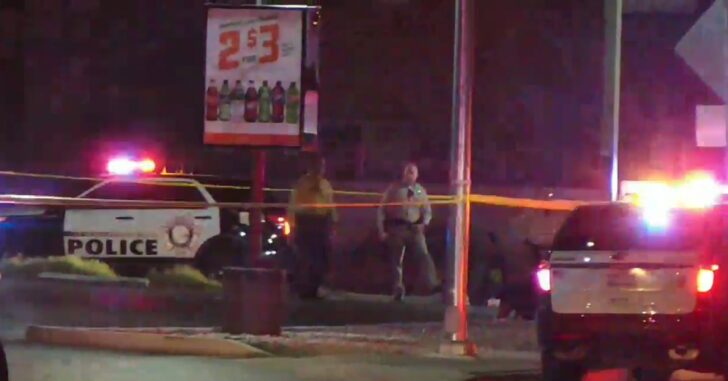 LAS VEGAS, NV — A man was killed after he and two other people got into a spat with employees at a local convenience store, the Las Vegas Sun reports.

As the Las Vegas Sun reports:

The shooting happened shortly before midnight at a 7-Eleven in the 4500 block of Vegas Valley Drive, police said.

Three people showed up at the store about 45 minutes before the shooting and got into a confrontation with employees, police said. After they left and returned, there was another encounter, and an employee fatally shot a man in his 20s at least two times in the chest, police said.

Police said they found two knives at the scene but have not determined what prompted the confrontation.

The employee who fired the shots was taken to Metro headquarters for questioning but was not arrested as the investigation continues, police said. The other two people with the shooting victim also were being questioned, police said.

There is not a whole lot you can do that could possibly be dumber than starting a fight, leaving — giving you time to cool off — then coming right back to pick things up again.

It’s stupid, it’s dangerous, and any court of law on the planet is going to see that as a deliberate attack — not some impulsive mistake.

It’s unknown who the knives belonged to, but it does seem more likely that a group of guys looking out to get revenge for some slight or another would be armed with blades than covenience store employees.

Regardless, for one of the agitators, any speculation or assigning of guilt is too little, too late.

If you’re that mad, go outside, take a deep breath, and unless it’s a life-threatening situation, relax.