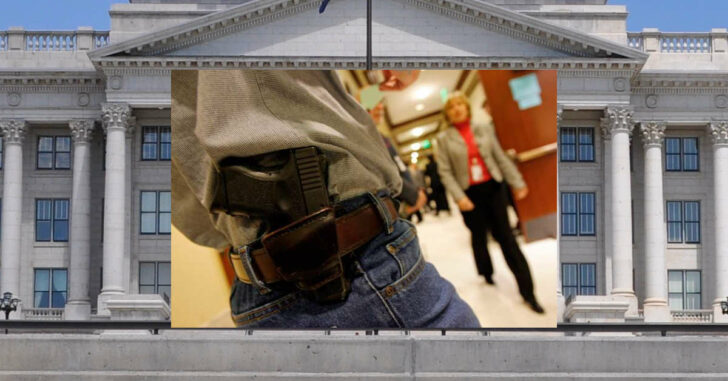 Welcome to Current Year + 2. Governor Will Herbert has stated that if HB 237, which would allow Utahns to carry concealed without a permit, makes it to his desk, he will veto it so long as it is reminiscent of prior attempts.

According to one analysis of the upcoming bill, via Utah Policy.com, the chances of such a bill passing on its own merits are grim. However, no one can’t claim that politicians aren’t crafty creatures.

Curtis S. Bramble, Senate sponsor of this bill, has tied it inextricably to enhanced prohibition against domestic violence.

Basically, domestic violence victims have a lot more legal protections while allowing the majority of the population not committing domestic violence to carry a firearm so long as they are legally permitted to possess one.

Will the bait work?

So permitless concealed carry could be feasible so long as those convicted of domestic violence are absolutely prohibited from purchasing or possessing firearms.

The bill is still being debated within the Senate and the House. If approved, it will be a much more complicated decision for Gov. Will Herbert. Many Senate politicians argue that the concealed carry laws already in place work great for their citizens. Utah does have a fantastic concealed carry reciprocity rate with other states and their laws are generally very permissive of gun ownership and concealed carry. However, what are the acceptable limits on the Second Amendment? That’s truly the question in debate insofar as state’s rights are concerned.

Policy analysts, at present, seem timid on declaring whether or not the governor will come out against this deregulation.

Deregulation. The process whereby the government asserts its rights over the people and then cedes those rights. It’s complicated and it really shouldn’t be. Local, state, and federal, there’s always one thing they will always share: they don’t like to give up power.

They’re going to use all sorts of allegations of the abuses that some — in some cases legitimately — bad people will take as a result of deregulation.

However, it’s an individual’s express liberty to bear arms.

How then should the state government respond?

In this particular case, I think the state legislature may have a good case for establishing permitless concealed carry. So long as those who are not lawfully allowed from possessing firearms are correctly reported from the courts to law enforcement, there should be sufficient process to deal with them should any of them violate conditions of the law.

By increasing the penalty for possession of a firearm, Utah is also incentivizing those who are accused of domestic violence of obeying the provisions.

For the law-abiding citizen of the proper age and record, a gun is your right. For those who prey upon others, break laws, inflict injury, the penalty is made harsher and word is spread more uniformly.

This could be a real opportunity for Utah to join the permitless concealed carry wave while still adhering to the values we have as law-abiding Americans. I hope Gov. Herbert sees it the same way.

In the meantime, there’s a great concealed carry program in Utah and I heartily recommend that if you’re able to, push through and get that permit. Carrying every single day is a great way to ensure your safety comes before that of the criminal.

Previous article: Why The Handgun? Next article: Tips For Concealed Carry While Riding A Motorcycle