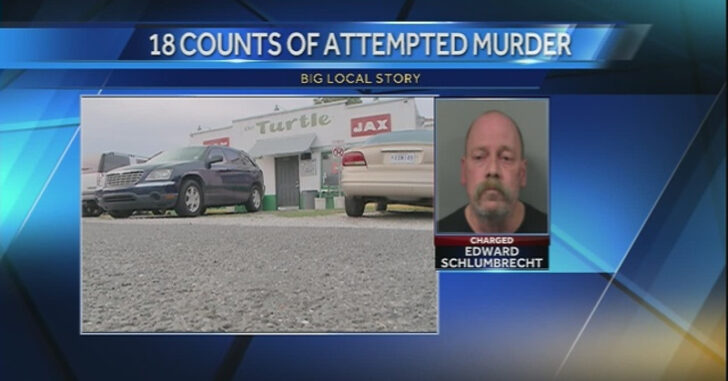 NEW ORLEANS, LOUISIANA — Edward Schlumbrecht, 52, armed with an AK-47, .40 caliber handgun and .38 Special derringer, held ten employees and patrons hostage in the Turtle Lounge in Metairie last Friday.  Thankfully, a fast-thinking bar patron lead the assault and successfully disarmed and subdued Schlumbrecht before he could harm or kill anyone.  However, straight from the beginning – that wasn’t a fair assumption that this event would end well.

The main hero of the day, covered by the New Orleans Advocate, was Marcus Collins, 43.  Collins was just setting down to have a beer with his girlfriend when he saw Schlumbrecht arrive clutching an AK-47 variant with “his finger on the trigger.”

Collins describes the general panic that ensued as patrons and employees tried to escape by every means available.  Fleeing out into the back courtyard, Collins tried to keep the back door closed to bar Schlumbrecht’s pursuit.  The assailant fired several shots through that door.  Thankfully, Collins used his foot to bar the door and not his body.

“If I was holding it with my body against the door,” he said, “I definitely would have died.”

A number of other patrons and employees had not been able to escape by hopping over the walls in the backyard area of the bar.   Stuck in the back, they were effectively taken hostage by Schlumbrecht.

JPSO’s SWAT team and deputies formed a perimeter around the bar while the hostage situation sat in a tense lull.

Throughout the ordeal, Collins recalls Schlumbrecht telling him and the rest of the hostages he was going to kill everybody.  Understandably, everyone was pretty well upset about this.

Finally, after a few hours, Collins managed to convince Schlumbrecht to let him retrieve some water and beers for the hostages.  While behind the bar, he snuck several fruit knives into the bucket of suds.

“This is my type of guy,” Justin Hungerman, 31, thought to himself when Collins passed him one of the knives. “We were thinking exactly the same thing.”

Once armed, the hostages simply waited for the right opportunity to strike.  And according to sources at New Orleans Advocate – that time was drawing closer and closer as Schlumbrecht became increasingly hostile and irritable.  The hostage-taker demanded the release of his son from prison amongst other things that just weren’t going to happen.

Finally, Collins saw a chance.  Schlumbrecht put his handgun on the floor in a moment of distraction.  He dropped his situational awareness — if it could be said he had any to begin with.  It was at that moment Collins headed up the assault.  He charged Schlumbrecht and tackled him to the ground – kicking away the handgun and holding the AK-47 against the assailant’s chest cross-bar.

Collins’ ally, Hungerman, jumped in and was quickly joined by another hostage as they rushed to secure Schlumbrecht.  Thankfully, deputies wasted no time seeing the opportunity to advance and joined the hostages in securing the man whom had terrorized them for two hours.

Collins was briefly handcuffed until authorities could tell from friend from foe — a common thing we point out in self-defense scenarios when law enforcement arrive.   But he was quickly released once his identity and role in the situation could be confirmed.  He’s now being hailed as a quick-thinking hero and Schlumbrecht is sitting safely behind bars.  The assailant is being charged with 18 counts of attempted murder, 18 counts of false imprisonment, 18 counts of aggravated assault, one count of illegal discharge of a weapon and one count of possession of a firearm in an alcoholic beverage outlet.

Needless to say, no one was injured and Schlumbrecht will likely be reunited with his imprisoned son soon enough – if he doesn’t skip right over the county jail first.

“But Concealed Nation, why are you writing about a story where nobody used a gun in a defensive situation?”

Good question, reader.  Because the skills used in this scenario illustrate the type of thinking emblematic of people who survive trauma.  Quick thinking, teamwork, and self-determination are important features of the concealed carry mindset.  A firearm is ultimately a tool –  a tool which can be used for good or ill depending on the hand that wields it.  Is it is the person, however, that determines the outcome.