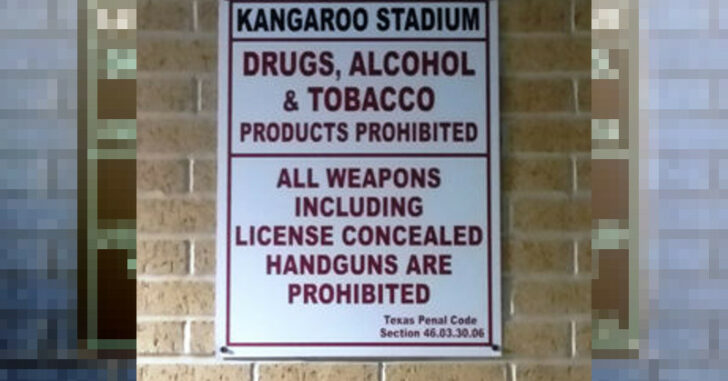 WEATHERFORD, TEXAS — Remember the new Texas legislation that allowed campus carry but still gave administrators permission to restrict lawful carry in certain areas?  That law did not extend to high schools or other protected school zones.  This man must have forgot — and the clearly marked signs outside the auditorium where he went to his son’s ninth grade orientation must not have helped jog his memory.

A 39-year-old father of a newly matriculated student will be facing third degree felony charges following a negligent discharge when he absently reached into his pocket.  The location was the Kangaroo (“Roo”) Stadium at Weatherford High School — which is lawfully designated a firearms free area.  Whether or not a concealed carrier (or a criminal) personally agrees with that policy is another matter entirely.  Unfortunately, this concealed carrier is about to get a taste of Texas law because of that disagreement.

According to the Weatherford Democrat,

Witnesses in section G reported hearing a gunshot and then seeing a man retrieve a pistol possibly off the ground, put it in his pocket and hurriedly leave the area, according to Weatherford Police CID Sgt. John Rudolph.

Was it an innocent mistake?  Potentially.  It appears through multiple sources and witnesses that the man clearly did not intend to harm anyone and after police inquired with him about the case, he turned himself in.

Whether or not we, as law-abiding concealed carriers, agree with a state-designation of a “gun free zone” does not make us exempt from the law.  In a civil society, when we don’t agree with something – we get the law changed.  When we take the law into our own hands, we’re held accountable.  And for that father, he’ll be facing serious charges if convicted.

“We are extremely fortunate that no one was injured as a result of this incident,” WISD Superintendent Jeffrey Hanks said. “Weatherford ISD is currently working with the Weatherford Police Department and will pursue charges to the extent of the law.

“We consider school premises to be sacred ground. We’d like to remind every that a license to carry a concealed handgun does not permit an individual to bring a weapon on school property.”

And likely in completely unrelated news, some ninth grade freshman now has to spend some indeterminate amount of time awkwardly avoiding the question of whether it was his father who accidentally shot the stadium bleachers… As if ninth grade wasn’t awkward enough.