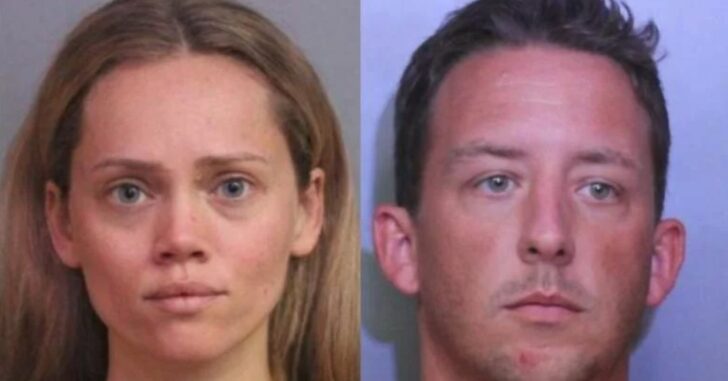 Today’s tale of unusual Floridian citizen/law enforcement interface involves the troubled marriage of Courtney and Joseph Irby of Lakeland. The two are reportedly estranged and involved in acrimonious divorce proceedings.

Joseph was arrested recently for allegedly trying to run Courtney off the road with his car subsequent to an argument that started outside the county courthouse after a divorce hearing.

Records show Joseph Irby screamed and yelled at his wife while he rammed the rear end of her vehicle and tried to run her off the road as she was on the phone with police.

Officers said Courtney Irby was hysterically crying when they interviewed her and she was in fear for her life.

Courtney reportedly had a previous restraining order issued against Joseph. When he was arrested for the current alleged vehicular assault and domestic violence charges, she was granted another TRO, but was concerned that he wouldn’t turn in his firearms as the judge ordered.

Her solution: break into his apartment, steal his guns, and turn them into police herself. While handing over the firearms at the Lakeland Police Department, she told an officer what she had done.

According to Courtney Irby’s arrest affidavit, she told police her husband had been taken to jail for trying to run over her with a car. Irby said she went to Joseph Irby’s apartment on Village Center Drive in Lakeland and searched for the guns she knew he had.

When she told a Lakeland police officer she had the guns with her to turn them in, he replied, “So are you telling me that you committed an armed burglary?” and Irby answered, “Yes, I am, but he wasn’t going to turn them in, so I am doing it,” according to reports.

Police then got in touch with Joseph…who was still in the county jail. He told them that he wanted to press charges against his wife. They then arrested Courtney and charged her with armed burglary of a dwelling and grand theft of a firearm.

Both Irbys have since bailed out of the county jail and Courtney’s arrest has sparked outrage on the part of some politicians and gun controllers.

Previous article: Fugitive Located By An Armed Property Owner And His Dog, Held At Gunpoint Until Police Arrive Next article: City Sign Deliberately Endangers Citizens, Says "Too Bad For You"