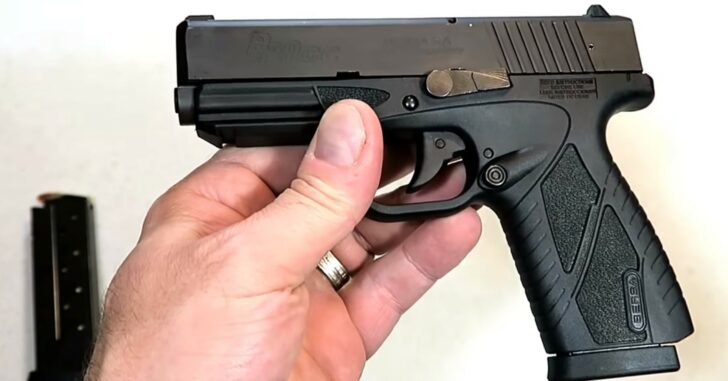 The Bersa BP9CC (Bersa Polymer 9 Concealed Carry) is a lightweight 9mm carry gun that has been around for about five years. It was always a gun that I would “eventually” get. I read and watched reviews as people raved about the size, weight, trigger action and the price. Many guys said the BP9CC was as accurate and equally reliable as other more expensive polymer-frame single stack 9mm handguns.

I have owned the Bersa BPCC for five months, I have to say, it’s an impressive little pistol. The BP9CC is definitely budget priced. The MSRP is $302 however it can easily be purchased for $250 online. Possibly a little more at your local gun store however the features this pistols offer makes it an incredible bargain.

The weight of the BP9CC makes it a popular concealed carry choice. Unloaded with the magazine inserted, the BP9CC weighs just over 21 ounces. With a loaded eight round magazine and a round in the chamber,  the pistol weighs just over 25 ounces with a total of nine rounds. Considering the thinness of the grip and slide, many guys love carrying the Bersa BP9CC.

The owner of a local gun store told me that people tend to buy the Bersa BP9CC after they dry fire the pistol. He mentioned the gun sells itself with the very lightweight trigger. It is a double action trigger pull that weighs just four pounds. The light trigger is most noticeable when live firing at the range. The short and light trigger action coupled with the extremely short reset allows the shooter to remain on target.

Other features include a short 3.3 inch barrel, ambidextrous magazine release, forend accessory rail, loaded chamber indicator bar on top of the slide and a very thin and nicely textured grip. It also has some memory texturing on the frame for the weak side thumb to rest with a two handed grip which is commonly seen on CZ polymer frame handguns. It has a three-dot sight system. The rear sight dots are smaller than the large front dot which makes it easy to acquire when firing. The overall fit, feel and finish on the BP9CC resemble that of a higher end handgun.

Love it or hate it, the BP9CC has a magazine disconnect that will render the trigger useless when the eight round magazine is not inserted. It also has a slide lock located on the right side of the rear slide. Bersa provides two keys in the case. A key can be inserted into the slide and lock it to the frame. Some shooters may use this option when traveling with their pistol. It sits flush to the metal and can be easily ignored when not in use.

Disassembling the Bersa BP9CC is an easy process that requires no tools. Assuring the gun is empty with no rounds in the inserted magazine (due to magazine disconnect) pull the trigger. Align the marking on the slide with the marking on the rear of the frame by pulling the slide back a half inch. From the right side, push the slide stop pin and pull it out on the left side. Remove the captured recoil spring/ guide rod and the 3.3 inch barrel to complete the process. Simply perform the same steps in reverse order to reassemble the gun.

When I took the Bersa BP9CC to the range, I understood why so many shooters were impressed with it. Right out of the case, It was extremely accurate when shooting from various distances. The light trigger and short trigger reset was extremely noticeable when live firing. I was able to transition from target to target quickly with successful impacts. Overall, I was very pleased with the shooting experience the Bersa BP9CC offered.

Check out the table and range reviews attached and let us know your thoughts and experiences with the BP9CC or any other Bersa pistol.

Previous article: Irresponsible Gun Owner Saves The Day After Pistol-Whipping Man Who Was Ramming Vehicles Next article: Man Tries To Rob Disabled Volunteer, Is Then Held At Gunpoint By Concealed Carrier