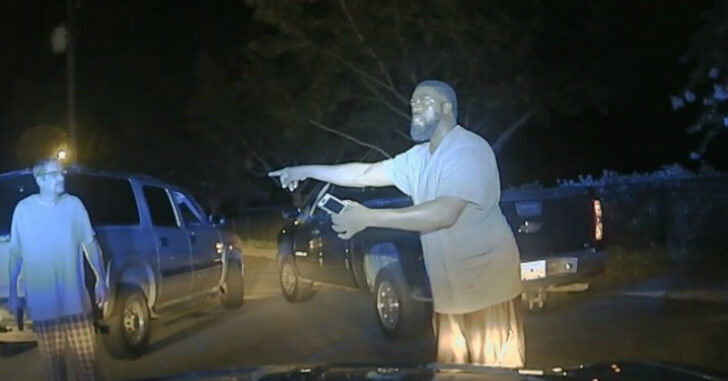 SOMMERVILLE, SOUTH CAROLINA — Hold on to your hats, folks – this is a doozy of a tale coming out of Sommerville, South Carolina.  At approximately 12:35 am, a repossession driver with Premier Recovery spotted a 2009 Chevy Silverado that was on a list of vehicles to be repossessed.  The driver pulls over in front of the house and having seen someone spot him out the window, did the respectable thing and approached the front door to inform the occupant that he was there to reclaim the vehicle.

It was then that the occupant, Leroy Fulton, allegedly pointed a handgun at the repo driver’s head and told him to “leave or die.”

Faced with those decisions, the driver intelligently decided to back off.  However, one of Fulton’s neighbors, a county coroner with the Dorchester County Sheriff’s Department, Chris Nisbet, happened to see the incident take place and intervened on behalf of the repo man.

While Nisbet talked with the repo driver, Fulton got into his vehicle and attempted to drive off.  Nisbet, according to sources at ABC 4, pursued.  According to Nisbet, he saw Fulton toss something out the passenger’s side window of the vehicle.  Nisbet pursued with his emergency lights on.  He intercepted Fulton’s vehicle and when authorities arrived, Nisbet was seen with his firearm facing the ground but at the ready.

Nisbet was briefly detained by police until they could ascertain the situation.

“I’d much rather SLED [South Carolina Law Enforcement Division] investigate me than me having to investigate a poor, hardworking man who got shot at my neighbor’s front yard for trying to do his job,” Nisbet said to ABC 4. “Absolutely, investigate away.”

Fulton has a different story.  While he was pulled over, he claimed that he was afraid to reach for his phone.

“He pulls a gun on me and I want to call but I can’t, because my phone is on the ground,” Fulton said. “I’m not about to reach down, I’m fearing for my life already. I don’t know what’s gonna happen with this guy. He’s drinking, under the influence of something, I don’t know.”

The allegations of the consumption of alcohol will be considered in SLED’s initial inquiry, confirms sources at ABC 4.  Nisbet does not outright deny the allegations he may have had a beer or two.

County officials have not formally ruled whether or not a formal criminal investigation will be conducted and at this time, all three were not arrested.  The repo man did get his vehicle.

Previous article: A Perfect Example Of How Gun Control Puts Guns In The Hands Of Criminals Next article: Justified? Armed Robbers Smash Through Store Gates - Greeted With Gunfire