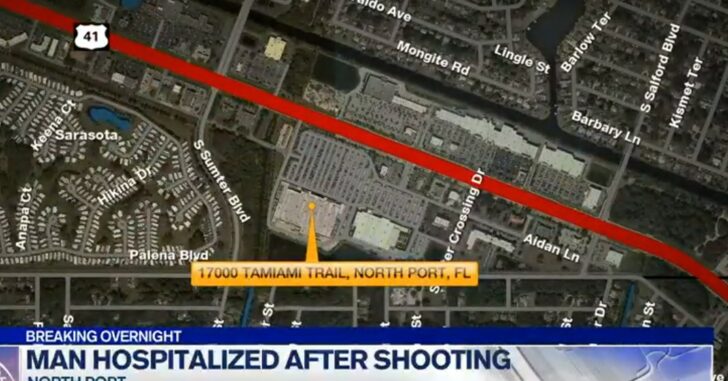 NORTH PORT, FLORIDA — An armed robber is in the hospital after being shot by the boyfriend of a woman he was trying to rob at gunpoint as she was standing at an ATM.

The first thought regarding this story; try to avoid places like the ATM after dark.

It happened shortly before 10:30pm on Thursday. Police say a woman was at the ATM at the Suncoast Credit Union on Aidan Lane while her boyfriend waited in the car.

While she was at the machine, a man with a loaded handgun walked up to her. The woman’s boyfriend, seeing what was happening, got out of the car and shot the robber several times.

Police arrived to the scene, and shortly after were able to locate the driver and the suspect less than a mile away. The robber was flown to a Sarasota hospital for treatment.

From the story, it appears that the woman and her boyfriend left after the self-defense shooting. The boyfriend then went to the police station to report what had happened. His story matched witness accounts, video surveillance, and the guilty conscience of the suspect.

Many times, an armed robber doesn’t want to kill. They simply want the cash, or whatever else they were after. But, and that’s a big but, we can never know for sure what their actual intentions are.

The bottom line; a firearm is a deadly threat, whether or not they intend to pull the trigger. That display of force is all one needs to defend themselves against a deadly threat.

Previous article: Armed Ex-Boyfriend Shoots Ex In Back As She Shielded Her Children, Armed Security Nearby Hears Gunshots And Moves To Help Next article: [VIDEO] Officer Doesn't Win Against Three Armed Thugs