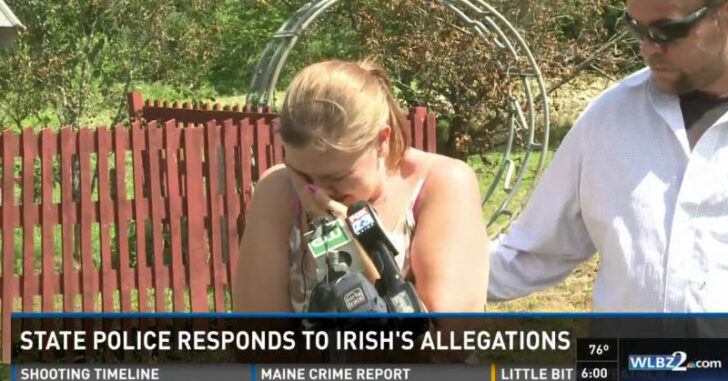 Civil society is based on one thing and one thing alone: the rule of law.  We abide each other, our neighbors, and strangers all upon the basis that the law will be enforced to protect us and enable good commerce.

A lot of gun control advocates will tell you all about how the police are sufficient to protect you.  They’ll say that if you’re robbed or mugged or attacked, just roll over and play dead.  The police will fix everything.  There’s no need to own a gun or carry a gun on you – that’s barbaric.

And then we run into cases like what happened just last Friday.

Brittany Irish, on Wednesday, July 14th, was kidnapped, assaulted and raped by a man in northern Maine.  She escaped and informed police as to what happened.   She presses criminal charges alleging the same against the man who did those things.

Maine State Police don’t apprehend him.  Instead, they call him up on the phone and inform him that criminal charges have been filed.

What does he do?  He goes to the woman’s mother’s home and burns her barn down.  Maine State Police arrive and tell the mother they can’t help her and they won’t post a trooper on the residence to protect her even though ALL SIGNS were there that an attack was imminent.

Brittany Irish and her boyfriend, Kyle Hewett, arrive at her mother’s house to see if she’s alright.  They stay the night.  That next morning, July 17th, at approximately 5:15 am, the alleged rapist and kidnapper blows open the door of the house with a stolen firearm.  Kyle, Brittany’s boyfriend and father to their children, is shot down in cold blood trying to get his family to safety.

Brittany Irish is shot in the arm and kidnapped a second time.

Here’s a breakdown of the events, as given by WLBZ-2’s television report:

4:40 am – Kerry Mayo’s home is broken into.  He’s tied to a chair and beaten.  His truck and guns were stolen.

5:18 am – Carlton Eddy suffers a shoulder wound as his side window is shot out as he turns around in the driveway of the Irish home.  He went to the home to see the damage done to the fire the night before.

5:50 am – A police officer spots the stolen truck near I-95.  During the chase, gunshots are exchanged.  The officer loses the truck.

2:00 pm – Maine State Police finally arrest the killer at the home of his uncle.  Brittany Irish is found and is safe.

The father of Brittany Irish, according to WLBZ-2, filed a protection order against the killer/rapist/kidnapper/arsonist back in 2011 when he showed up to hospital where Irish was giving birth to one of her children.  That, obviously, didn’t work.

The killer was apprehended after two people were dead – including Kyle – and four injured.

Colonel Robert Williams said in a statement to WLBZ-2,

“State Police last week were investigating a sexual assault incident where Brittany was the victim…  This is a double homicide prosecution now in the court system.  As with any active homicide investigation, it would not be appropriate to discuss it at this time.”

If anything has ever cemented in my mind why I carry – it’s certainly real life events like this that pound it home.

Concealed carrying isn’t just about making a statement or some political mumbo-jumbo.  It’s the reality of knowing that we live in a world with other people who have absolutely no problem doing heinous and vile things to anyone they choose.

As for the killer?  He’ll get a trial eventually.  And he’ll do time.  And the Maine State Police will do a little investigation.  And some trooper somewhere will get a medal and someone else will get a raise.  Were any lessons learned?  Will future events like this be prevented?

Yes – by concealed carriers like you and I.  Because we train and we practice and we prepare.  Because we know by the time the police arrive – the fighting is usually long over.  And when it’s our families on the line, we don’t leave those sorts of things up to chance.

Situational awareness.  May we always have it.