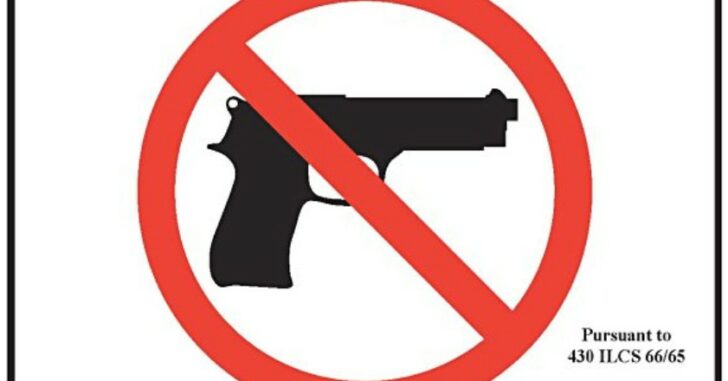 By Johh Boch via TTAG

You read that right: Since 1950, 97.8% of mass public shootings happen in so-called gun-free zones. As if we, the People of The Gun needed another reason to avoid these locations whenever possible.

Dr. John Lott, author of the ground-breaking book, More Guns, Less Crime, has done a ton of research on guns in society.  Today, his Crime Prevention Research Center publishes a lot of valuable information. Their goal: “to provide an objective and accurate scientific evaluation of both the costs and benefits of gun ownership as well as policing activities.”

One of their bits of research on violence in so-called gun-free zones returned to center stage with the recent mass murder spree in Aurora, Illinois. Five people died in that instance of workplace violence.

The business where the tragedy occurred, the Henry Pratt Company, posted conspicuous signage banning guns from their facility. Of course, that did little to stop a deranged felonfrom packing his illegal gun illegally.   And shooting and killing people. Illegally.

The sign merely kept all law-abiding good guys from bringing their legal guns in so they could defend themselves and other innocent people.

Note the sign on the door into the facility.

In the picture below, the name of the Henry Pratt Company, where the mass public shooting on Friday took place, can be seen on the back wall in the picture. The no gun sign can also be clearly seen on the door.
Yet another #MassPublicShooting in another #gunfreezone. pic.twitter.com/yKN5poojVK

In a post at the Crime Prevention Research Center from last year, Lott outlines how virtually all murderous shooters pick locations where good guys can’t fight back to commit their atrocities. In fact, per Lott’s research, 97.8% of mass public shootings happened at these “gun-free” zones.

Lott looks at mass public shootings, first defining them using the FBI’s definition. The G-men exclude gang and drug violence, and count only incidents in public where four or more victims died, not counting the bad guy.

How does Lott count “Gun Free” zones? From CPRC:

— Places where only police or military police are classified as gun-free zones.

Stationing a uniformed police officer or security guard in a public area often only gives a false sense of security. Knowing that the uniformed officer is the only person with a gun makes things quite simple for attackers. They need only kill him first.  It is the equivalent of having them with a neon sign saying “shoot me first.” The media fact checkers seem unwilling to accept is that concealed handgun permit holders take away that strategic advantage from the killers.

— Places, where it is illegal to carry a permitted concealed handgun, are classified as gun-free zones.

Depending on the state bans on carrying in certain areas.

— Places that are posted as not allowing permitted concealed handgun.  A few examples:

—  Places where by law permit holders were banned. A few  examples:

The many school shootings keep on occurring in those schools where permitted concealed handguns are banned (e.g., Parkland 2018, Sante Fe 2018)

— Places where general citizens are not allowed to obtain permits.  Permits are either not issued at all to citizens or to only a very tiny selective segment (so-called may issue laws), usually judges, prosecutors, deputy sheriffs or very wealthy individuals.  Compare to the 8.5% of adults outside of California and New York who have a concealed handgun permit.

In Alameda County, a may issue county, there were only 85 people with concealed handgun permits at the end of 2011 out of an adult population of 1.2 million, a rate of 0.007 percent.  Those with permits were mainly judges, prosecutors, and wealthy businessmen.

In September 2011, there were 240 permits in all of Los Angeles County when the population was about 7.6 million adults.  That equals a permit rate of 0.0032%.  Of the 240 permits, most go to judges and reserve deputies (who are big campaign donors).  Ten percent of permit holders are on Sheriff Lee Baca’s “gift list”  In addition, the attack was at a residential dwelling, not a public place.

In Orange County, a may issue county, there were only 551 people with concealed handgun permits out of an adult population of 2.26 million, a rate of 0.02 percent. Those with permits were mainly judges, prosecutors, and wealthy businessmen.

The bottom line: avoid places where magical signs and wishful thinking prohibit law-abiding people from carrying the proven deterrence of cold steel. The life you save could be your own.