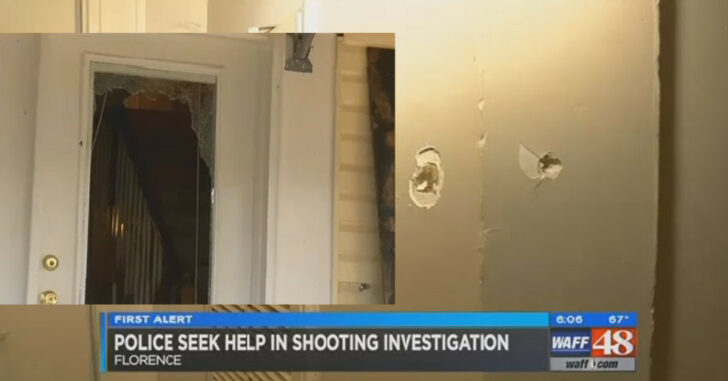 FLORENCE, ALABAMA — A homeowner, his mother, and two young cousins were unexpectedly delayed from their holiday plans when three armed burglars broke in and immediately opened fire. Thankfully, the homeowner had a rifle nearby and was able to return fire, killing one suspect.

“There is no need for nobody to try and shoot through someone’s door and come kill that person and take what’s in their home,” he said. “I hope they find the perps who got away and I hope they find out who all put that together.”

Investigators have reason to believe that this home invasion was planned. The homeowner told authorities that both him and his mother had intended to depart for the holidays but were unexpectedly delayed. He believes that the home invasion was timed for them to be away. Unfortunately for suspects, he was prepared.

“Where I come from in Detroit it happens a whole lot, so my mind frame was to protect my family at any given cost because you’d never know what would happen or who would try to do something to you because there’s a lot of crazy people out in this world,” he said.

The homeowner managed to get both of his cousins, 11 and 13-year-olds, to cover and reportedly shot one of the suspects multiple times. That suspect was found inside the home and was taken to a nearby hospital where he was declared dead.

The homeowner admitted he did not know the deceased prior to the incident.

The attack occurred just before 3 a.m., indicating that the burglars intended to use violence and hit the family when they weren’t expecting it. This should give a bit of background in the level of preparation the average gun owner needs to have when considering when he’s most vulnerable.

If everything had gone right for the burglars, there likely would have been significant loss of life and injury. It’s a good thing there was a gun owner in the house who understood the basics of cover, concealment, and barricading. He made his home a hard target while making his opponents move into his field of fire.

Be careful out there this holiday season. Avoid publishing your travel plans across social media and other outlets where that information can be used by criminals to organize a home invasion or worse. And, as always, carry every single day — especially in the home.