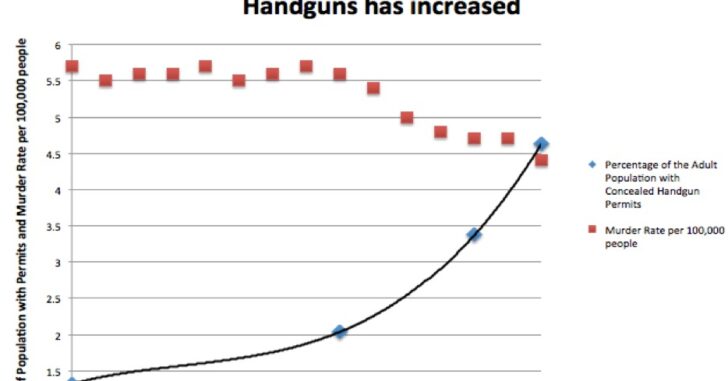 It’s a basic curiosity most concealed carriers have. How many others are there out there just like them? It turns out it’s pretty hard to find out a true number.

According to the Government Accountability Office’s 2012 report, there are certainly more than 8 million active concealed carry permits that have been issued by individual states. Not all states report the number of concealed carry permits they issue – like New York. Some states are classified (or soon will be) as permitless carry states and don’t have any permits to issue. And there are certainly states that don’t distinguish their reported resident versus non-resident classification when tallying their numbers.

The Crime Prevention Resource Center (CPRC) placed the number of active concealed carriers closer to 11.1 million. And likely even that estimate is still pretty conservative.  The CPRC and the GAO both acknowledge immense difficulties in accruing an accurate estimate because there is no standardized reporting mechanism for concealed carry permits to the national level.

What is known is that each year, more and more Americans are applying and receiving concealed carry permits than ever before.   And as the CPRC pointed out in that aforementioned report – when they were attempting to tabulate figures, they also discovered an interesting correlation between the number of concealed carry permits being issued and a precipitous drop in national homicide rates.

More interesting is the percentage of a state’s total population that’s estimated to have a concealed carry permit.  States like South Dakota boast a 12% concealed carry population.  In Indiana and Utah, one out of every ten people has a permit to conceal a handgun.

With statistical analysis, there’s rarely a same-year scenario so there’s likely a lag between, say, the 2012 GAO report and the 2014 CPRC report.  And in 2015, states like Texas and Wisconsin have greatly expanded their gun rights – which will hopefully bring on more eager law abiding citizens into the fold.  States like Maine are scheduled to become constitutional carry states (permitless concealed carry) and thus won’t be obliged to report any numbers.

Why Having An Unknown Number Of Concealed Carriers Is Good

Why give a criminal the chance to estimate his likelihood of running into meaningful, armed resistance?  Having an unknown number of concealed carriers means there’s an unknown chance of either having someone come to your aid if you are attacked or, conversely if you’re an attacker, running into lethal force.

The real people that should be worried about these statistics are career criminals – people who prey upon the weakness of others and will stop at nothing to get what they want.

“An armed society is a polite society,” as the saying goes.

The trend seems to indicate that more Americans are uncertain about being universally protected by police in the event of a hostile situation.  And who can blame them?  There’s news reports on gun violence every single day and the massive minority are those involving a concealed carrier defending himself or herself from an armed attacker.  But those stories are indicative of a growing trend: it’s becoming less and less safe to be a criminal.

And in the end, isn’t that basically what being a concealed carrier is all about?

Previous article: Former CNN Anchor, Armed With Handgun, Stops Armed Motel Intruder... From The Shower! Pro Moves Here... Next article: [VIDEO] Why On Earth Would You Want A $7 Homemade Shotgun?