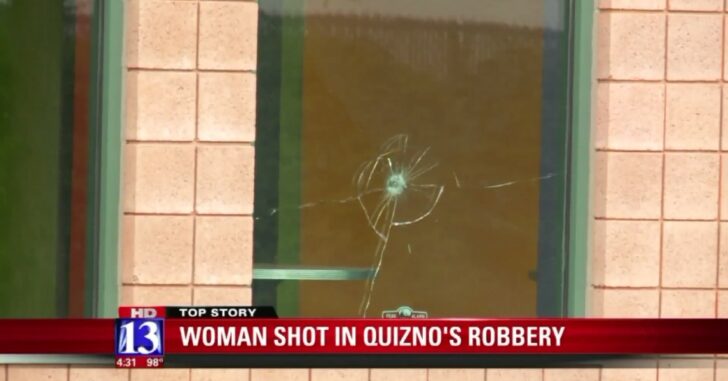 SALT LAKE CITY, UT — One of three robbers who attempted to knock over a Quiznos restaurant late last month was shot, because one of the employees in the sub shop was armed.

That thief was listed in serious condition when she was taken to the hospital. Her compatriots both fled the scene.

As The Salt Lake Tribune reports:

Wilking said that at about 6 p.m. Tuesday, the female suspect and two men entered the Quiznos at 1775 S. 4130 West, locked the door behind them and produced two handguns. There were two employee(s) in the store, one at the front counter and one in the back, (SLCPD Detective Greg) Wilking said.

While one of the robbers was attempting to get money from the register, the other two robbers tried to get into a back room, Wilking said. There, the second employee barricaded herself behind the door by pushing on it with her body, and then began firing a gun she had on her around the edge of the door, Wilking said.

“It was a take-over style robbery … which is much more dangerous for everyone involved,” he said. “We don’t see very many of those. It was a very scary situation.”

Although it’s hard to commend shooting around the edge of a door, this employee did manage to negate the danger to her life without injuring any innocents, and we can’t fault that.

When you can be armed at your place of work — do so. There’s no telling when you’ll need it.

It’s not often that we see this style of robbery, but it’s a scary one for sure.

“This is an extreme type of robbery,” Wilking said. “We’re talking about a situation where they’re locking the door, they’re forcing their way into the back room; it’s a takeover-style robbery. It’s not something that we see very often, much more dangerous for everybody involved.”