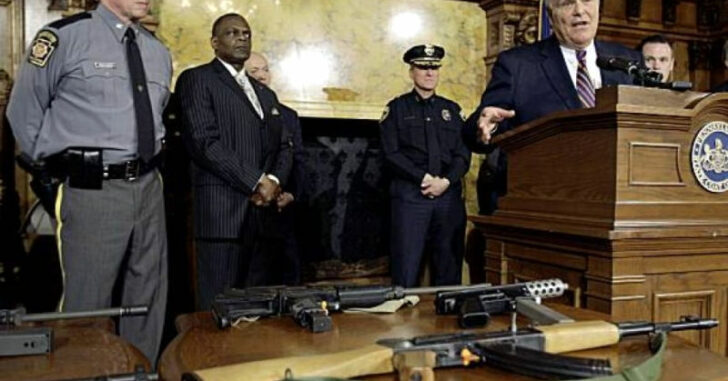 There are a lot of studies on gun violence and crime.  In science, one study doesn’t prove anything.  It’s a body of studies that lead us to understand a trend.  And the only trend in recent history we have to play off of is the Violent Crime Control and Law Enforcement Act of 1994.  Nested within that act was the Federal Assault Weapons Ban.  This act made a majority of semi-automatic pistols and quite a few rifles and shotguns illegal to sell.  It also limited access to large capacity magazines and prevented domestic manufacturers from making more.

For ten years, we had bans in place stopping law abiding citizens from purchasing those types of firearms.

What did the government hope to accomplish with the Federal Assault Weapons Ban?

Did it work?  More than a decade afterwards, we’re beginning to see that the ban was largely ineffective.

Dr. Christoper S. Koper is one of the leading researchers on gun violence in the United States.  Koper was the principal investigator when this question made it to the U.S. Senate.  In June, 2004, Koper and his team released their assessment for the Senate.  In that assessment, he and his team analyzed Federal Bureau of Investigation’s annual Uniform Crime Reports, case studies, and peer-reviewed statistics.

One of the main focuses was finding the answer as to whether or not the federal ban (Title XI, Subtitle A of the Violent Crime Control and Law Enforcement Act of 1994) had any effect on reducing violent crime.

If you’ll recall, the Brady Bill put a temporary ban on the sale of semi-automatic weapons and their magazines – “assault pistols” and “assault rifles” and “high capacity” magazines.

What did this government funded study discover?

Prior to Ban, Banned Guns and Magazines Were Used In At Least 25% Of Gun Crimes

Ban Did Not Reduce Criminal Use Of Banned Guns And Magazines

This government study concluded that the results are mixed.  What gun control advocates were looking for was definitive statistics showing that assault rifles, pistols, and high capacity magazines were used less in crime following a ban.  This would have vindicated the idea that a ban could be effective in deterring crime.  The statistics don’t support that.

Koper’s final assessment hinged on the fact that ten years is too short of a time to reduce existing stockpiles of large capacity magazines and assault weapons.  Thus, it’s nary impossible to tell if truly such a ban would hurt or help criminal activity.

Koper wasn’t the only one to study this question.  Plenty of criminologists have undertaken to find out how federal and state restrictions actually play against law abiding citizens.  In an independent study conducted by Mark Gius, et al., titled “An examination of the effects of concealed weapons laws and assault weapons bans on state-level murder rates”, he concluded the following:

“…The results of the present study indicate that states with more restrictive CCW laws had gun-related murder rates that were 10% higher. In addition, the Federal assault weapons ban is significant and positive, indicating that murder rates were 19.3% higher when the Federal ban was in effect.”

While studies are still being conducted to decide if gun violence is an increasing phenomenon in relation to access, the overall consensus is that the more law abiding citizens are kept from legal access to firearms for personal protection – the greater the likelihood of gun-related crime.

Should the government have a right to dictate which firearms are suitable for personal protection?  Tell us your thoughts in the comments section below.