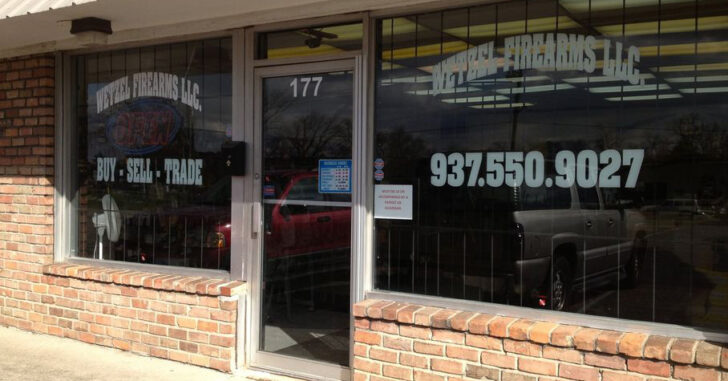 A gun shop 200 yards from a school? Sounds unusual, and I’m sure we can all anticipate the comments from neighbors, parents, and school administration. Wetzel Firearms opened across the street from the Franklin City junior high school and administration buildings in Dayton, Ohio.

The store stocks approximately 200 guns and 4,000 rounds of ammunition, and the owner chose this particular location because of its proximity to the interstate and its high traffic visibility.

“Unfortunately, it’s there across the street. We don’t like it and expressed our displeasure to the city manager’s office.”

Orville Griffith is a town resident. He shares,

But this is unlikely to actually happen for a few reasons. First, the shop is not open during school hours. The hours are limited to 4pm to 8pm. Second, customers may not enter the store unless they are at least 18 years old or are accompanied by a parent or guardian. Lastly, this guy is delusional.

Surprisingly, owner John Wetzel says that he hasn’t received any complaints since the store opened about eight weeks ago. He said that his own children attend the school across the street, which is another reason why he does not have business hours during the school day.

“I know parents who are not educated about firearms will complain. I understood that going in, so I said I’m not going to be open during school. Show them respect and get respect from other people.”

Despite the fact that firearms cannot be carried onto school campuses, there is no law that prohibits gun stores from being close to schools. However, according to U.S. Department of Justice, once a customer leaves the private property of the gun store and are located within 1,000 feet of a school with a firearm, they may be in violation of federal law unless the firearm is unloaded and is contained within a locked container or a locked firearms rack that is on a motor vehicle.

Even though there haven’t been any specific complaints about the shop, many residents still express their hesitation and feel it could be an unsafe situation for kids. Wetzel said that he wishes schools offered more education to students about firearm safety to avoid potential accidents with firearms. He said,

“If you have firearms, you teach your kids firearm safety. That way if they go to someone’s house and find a gun, they won’t get shot.”

Previous article: That Awkward Moment When Your Reattached Finger Falls Off During A Poker Game; Jose Canseco Style Next article: [VIDEO] The Dangers Of A Squib Load: Rifle Explodes In Girls Hands