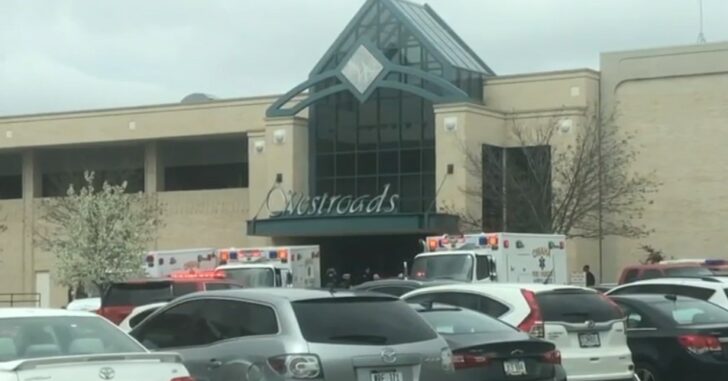 OMAHA, NEBRASKA – An Omaha area man made a conscious decision to carry his concealed pistol into a non-permissive environment on Saturday, and then made the decision to draw his defensive weapon to protect his family during an incident in a mall where shots were fired.

It happened at the Westroads Mall Saturday while Scott Tafoya and his family were shopping. “My daughter is getting baptized next weekend, so I wanted to get a nice special outfit for her baptism,” he said. As he was trying on a suit in Von Maur, his wife and two daughters went upstairs to shop.

Suddenly, he saw people running and heard a commotion. One of the men he saw made eye contact with him. “I looked in his eyes and he yelled, ‘Shooter,’” Tafoya said.

Tafoya headed upstairs to find his family, drawing his gun in the process. When he located his wife, she told him that she had heard gunfire.  “Every indication said our lives were in danger and I was going to do everything in my power to make sure we got out of there OK.”

Although he is a legal conceal carry permit holder, Westroads Mall is a weapon-free zone. “I knew that if I ever pulled that (gun) out it would truly be a life and death situation and I would deal with the consequences later,” he said.

Gun in hand, he stood guard as Von Maur employees hurried shoppers into a bathroom. When other shoppers looked at him, “I said I have a permit, I’m legal.”

He stood guard near the escalators to draw any threat away from where his family was, providing protection to other shoppers as well.  “Everyone else on the third floor just got added into that because the best way to keep my family safe was to make sure nobody with ill intentions came up that escalator.”

In that highly emotionally charged situation and moment, Tafoya didn’t experience fear, but rather sadness, as he faced the possible consequences of his actions. “I was sad. Because I wasn’t expecting to, if it was real, I didn’t think I was going to come home,” he said.

When police arrived, he stood down and made it clear to responders that he was not a threat. “I unloaded my weapon, I put it back in the holster where it was very visible that the slide was locked open. I put my permit in my hands and my hands above my head,” he said. Police allowed him to go home with his family without facing any charges at that time.

“I don’t condone anyone breaking the law. I made the decision that was right for my family, and I stand behind it. I may still get in trouble for it, if I do, it was worth it,” he said.

Tafoya believes that gun-free zones put citizens at unnecessary risk.  “I do not want to be carrying a weapon ever. It’s not comfortable, I don’t like it, I wish there was not a need for it,” he said.

Having been a permit holder for about four years, he commented, “I never, never ever expected to ever touch my gun. But I’m exceptionally thankful that I had it.”

It was the second shooting at the mall in five weeks, and mall management issued a statement saying that a highly trained weapon detecting canine would be visibly patrolling the premises for the forseable future. They also added that other behind-the-scenes security measures would be added but would not elaborate on what those may be.

The most recent incident occurred between rival gangs, was captured on surveillance video, and left a 21-year-old man dead. A 16-year-old is being held without bond in the homicide, and his older brother in under a $75,000 bond after being charged with an accessory for driving his younger brother from the scene.

Tafoya also said that Saturday’s incident will not discourage him from going to the mall. So here we have a man who made a conscious decision years ago to purchase and legally carry a gun, not out of a strong desire to just be armed but an even stronger desire to protect his family.

Saturday he made a conscious decision to carry that gun in a non-permissive environment, and a second conscious decision to draw the firearm in self-defense to protect his family and others. He was fully aware that he may not only face legal consequences for his actions, but was also fully cognizant of the risk to his own well-being, and was willing to accept that risk and give his life to protect the lives of others if necessary. His swift and well-intentioned response to the situation allowed his family and a number of total strangers to seek safety, and most importantly, he proactively identified himself to responding law enforcement and gave them absolutely no reason to perceive him as a threat.

Previous article: Chauvin Verdict Is In: Guilty On All Charges Next article: If You Try To Stab Someone In Front Of A Cop, You Can Expect To Get Shot