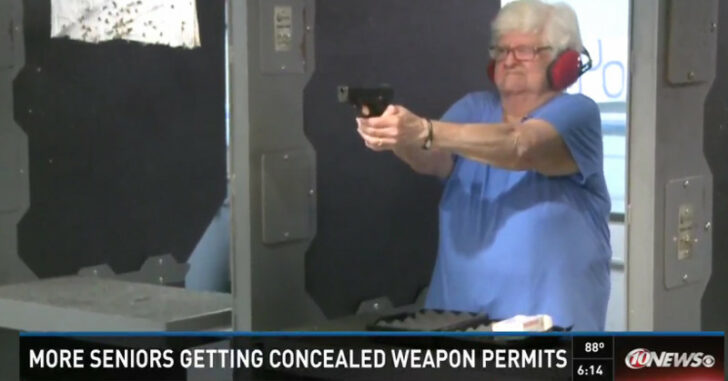 NEW PORT RICHEY, FLORIDA –Florida acknowledges an upward trend in the number of senior citizens applying for concealed carry permits.  WMAZ reports that many seniors are voicing their need to defend themselves against a rash of home invasions and robberies.

Senior citizens that were not even previously concealed carriers are now undergoing the training and process to become permitted.

“I’m older now and there’s so many home break ins and there’s so much going on today that it’s frightening,” said Mary Battaglia, 71, while talking to WMAZ.  During the interivew, Battaglia was completing her concealed carry course through Florida Firearms Academy.  FFA offers both courses designed to meet Florida’s requirements for a concealed carry permit and additional follow-on courses for beginners and experts.

Others, like Jack Ram, have always maintained firearms and feel that having a concealed carry firearm is a great step to evening the playing field between senior citizens and criminals who would take advantage of them.

“I feel I’m getting to the age where I can no longer protect myself,” Jack Ram, 72, told WMAZ.  “It’s something you do in the hopes you’ll never need it.”

According to statistics from the Florida Department of Agriculture and Consumer Services, men over the age of 66 comprise over two thirds of the registered concealed carriers for that age group in the state of Florida.

Actual studies published by the State of Florida discussing the relative rates of victimization of the elderly, however, have been very inconclusive.  One recently published report, entitled “Crimes Against the Elderly: Is the Criminal Justice System Doing All We Can?” (Florida Department of Law Enforcement) erroneously uses statistics from 1993 as a justification that elderly as the least likely to be victimized.

While the specifics of victimization of the elderly are debatable, elderly citizens obviously feel compelled to enable themselves to thwart intruders and attackers.  Shouldn’t they have the right to do so?