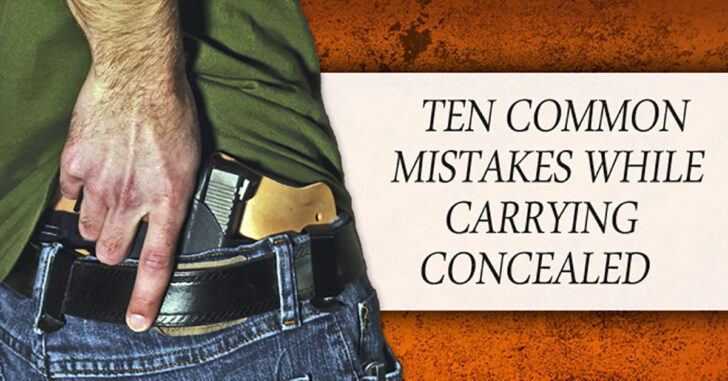 This is a guest post from Dieter Heren, owner of saltwaterandgunpowder.com, a site devoted to hunting, fishing, and shooting. He can also be found on Facebook and Twitter.

None of us are perfect. We all make mistakes from time to time, it’s how we learn. However, making mistakes when concealing a firearm can have serious implications. Instead of making you learn by trial and error, I’ve compiled a list of 10 common mistakes so you don’t have to find out the hard way. Most of the mistakes I’ve listed are made by those still new to carrying concealed, but even those with years of experience can be guilty of making a couple of these mistakes from time to time.

1. Having the minimum required training

In many states, a hunter safety course is enough to qualify you for a concealed weapons license. However, these courses often focus solely on being safe with a rifle in the woods. Although it’s great to know you’re not allowed to shoot over a road the next time you go hunting, it doesn’t exactly prepare you to go out into the regular world and interact with others now that you all of a sudden have a gun on your hip.

Even some classes that are specifically designed around qualifying you for a concealed weapons permit don’t do much in the way of preparing you. Do your research before choosing a class and find a reputable one that is more concerned with proper training rather than getting you out of the course as quickly as possible. The course concerned most about money will often go through some of the basics, have you shoot a few rounds, and send you on your way. You want a course that has instructors who are going to help you in every way possible to make sure you leave their class prepared.

Finally, don’t think that just because you met the minimum requirements for a license you’re now ready to navigate every situation you find yourself in. A responsible person who carries concealed is constantly learning, both mentally and physically. As legendary football coach Bo Schembechler often said, “Every day you’re getting better or worse…you never stay the same”.

Printing, where the outline of your gun appears from pushing against your clothing and exposing a part of the gun are mistakes that often arise from complacency. When you first start carrying, often you’re so concerned about your gun showing in public you’ll do anything and everything to make sure it never happens. After carrying every day for years, it’s still a thought but you’re nowhere near as scared of it happening. Just take that extra second to make sure you’re not printing or going to expose your gun at some point.

Honestly, most people are pretty ignorant to their surroundings anyways, but it certainly isn’t worth the trouble of someone freaking out if they do notice because you didn’t want to bother changing your 2 sizes too small shirt. Although some people are extremely concerned about printing, it’s not the end of the world if it happens at some point (although it may be illegal in some localities). It’s certainly not something to get into the habit of doing, but compared to exposing your gun, printing is nowhere near as big a concern. If your gun is exposed, you could find yourself in some serious hot water. The last thing you want to deal with is half the police station closing in on you with guns drawn because you bent over to pick something up and the lady behind you happened to notice your gun.

Trust me, if someone sees your gun and they’re scared, the 911 call won’t be a rational explanation of what happened. Take your time to make sure you’re not printing or in danger of exposing your gun before you leave the house.

This mistake is made not from purchasing an inexpensive holster, but a poorly made one. That nylon holster you got on special for $2.99 probably isn’t going to become your go to holster. There are some great holsters that aren’t overly expensive and some pretty awful holsters that are way too expensive. Whatever material you prefer for your holster, it needs to be able to retain your gun properly and be comfortable enough to wear day in and day out.

There’s a reason those who have been carrying for years have a drawer full of holsters in their house, the holsters didn’t perform the way they needed to. Don’t be afraid to experiment with several different holsters to find the one fits your lifestyle and your body properly. The benefits of a quality holster far outweigh the true cost of buying a holster solely based on price.

There are two different aspects to this mistake. The first goes back to the mistake of allowing your gun to print or become exposed. Just because you carry a gun doesn’t mean you’re doomed to a life of Hawaiian shirts and baggy pants. You can still have a sense of personal style while carrying, you just need to be sure that the clothes you’re wearing accommodate the gun you carry. With a little bit of experimentation you should be able to find the best way to do this that fits your own personal style.

The second aspect of this mistake comes with wearing tacti-cool clothing. Walking around in head to toe BLACKHAWK and 5.11 Tactical clothing just screams gun. The idea is to conceal the fact you have a gun on you, not announce it to the world.

This is a bad habit often seen by those just starting to carry concealed. As they go about their routine, they’ll casually reach back and touch the gun with their fingers or sometimes blatantly just check to see if it’s still there. Don’t worry, if you’ve gotten a proper holster it’s still there. If you catch yourself doing this when you carry, suppress the urges and leave it alone! All you’re doing is giving people another chance to see that you have a gun on you. With a bit of experience and self control this urge will go away.

6. Not practicing with SD ammo

A self defense situation is not the time to find out that your gun doesn’t like to feed your chosen self defense ammo. Take the time to practice with several different brands of SD ammo and find the one that your gun likes best. Yes, it’s more expensive than strictly shooting white box Winchester, but the extra expense is worth knowing that if the time comes to defend yourself or your family, you’re actually going to be able to do so.

Unlike checking to see if the gun is still there, this mistake comes when the holster has slid to an uncomfortable position or something has happened that you now need to re-adjust your holster. Doing this in public is a very bad idea. The movement of re-adjusting will draw quite a bit of attention to yourself, much more so than just touching the gun. If you do need to make an adjustment and you’re in a public area, the best places to do so are in a locked bathroom stall, your car, or a dressing room without security cameras. Just find a private place where you’re able to fix whatever needs to be fixed without worrying about someone figuring out what you’re doing.

If you’re going to carry, do your best to carry all the time. You wear your seat belt every time you drive (at least I hope you do) but you likely won’t end up in a car accident. The same concept applies to carrying your gun. You never know when you’ll find yourself in a situation where you need it, whether you’re away from home the whole day or just making a quick run to the gas station. Incidents happen when you least expect them, it pays to always be prepared.

It’s your responsibility when you decide to carry to know all the laws that can affect you, whether local, state, or federal. Every state and area is different. Find out what the exact law says for every area you find yourself in. Know whether you’re in a stand your ground or a duty to retreat state. Know where you’re allowed to carry and where you’re not. These laws are typically very easy to find with a quick Google search so you have absolutely no excuse not to know.

Luckily, the vast majority of people who carry are extremely responsible and have studied the laws so much they could pass as a lawyer. If you’re not one of these people and haven’t taken the time to know the ins and outs of firearm laws in your area, take the time to do so now.

10. Having the wrong mindset

As I previously mentioned, most people who carry concealed are extremely responsible and have the mindset that they’ll do everything in their power to avoid a conflict, but if violence comes their way, they’re prepared to do what it takes to protect themselves and their family. This is a great mindset to have. A big mistake that some less responsible people make is having an invincible or escalation mindset. These people will go out of their way to go down that sketchy alleyway or will intentionally escalate a fight. Just because you carry a gun it doesn’t mean it’s time to start looking for trouble or trying to start a fight. In fact, it means the exact opposite. By carrying a gun, you must do everything in your power to avoid trouble.

Go out there every day as a respectful and responsible person just going about your daily business and you likely will never have to use your gun in a self-defense scenario. Should the absolute worst happen, you and the police will know you had no hand in bringing the situation upon yourself. Don’t leave any room for doubt.

Previous article: Here is another guy who is setting us back years Next article: A Criminal Point Of View When Guns Are Not A Factor; Part I