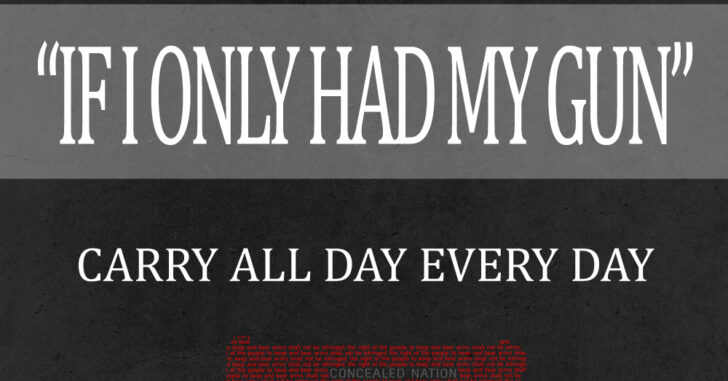 Face it, most of the time we hear similar things said after bad things happen; “We never thought anything like this would happen here. Not in our Town.”

Let’s say you live in a small town where nothing bad ever happens. First, we’ll tell you there is no such place. Now let’s say you wake up one morning and go about your morning routine. While in the shower, you begin to think about what you have going on that day. “Let’s see, I’ll need to go to the grocery store down the road and stop over a a friend’s house. That’s about it outside of the house. I won’t bother taking my firearm.”

If this is you, I want to change your mind. I want your firearm to be a normal part of your daily attire just as you would carry your wallet or purse.

When bad things happen, people are generally not expecting them to happen. You could be in the nicest part of the nicest neighborhood and find yourself in a bad situation in a hurry. Being prepared is the important part. You wouldn’t take your smoke detector down because you woke up feeling like your house won’t catch on fire that day, would you?

In the United States, the chances of you being a victim of a violent crime in your lifetime is 1 in 2. It’s a flip of a coin. And there isn’t any rule that says it can’t happen in your own backyard.

The simple fact is this: it can only take one violent crime to end your life. If that event happens to land on the one day you aren’t carrying your firearm, well, do I really need to say anything else?

Crime doesn’t take a break, and neither should your concealed carry firearm and training.

If you happen to be any of these people, you’d be glad you decided to have your firearm with you when you needed it most.

Previous article: When something goes wrong, how do you get back in the fight? Tap, Rack, Bang Next article: Chipotle: Don't Bring Guns in Our Stores