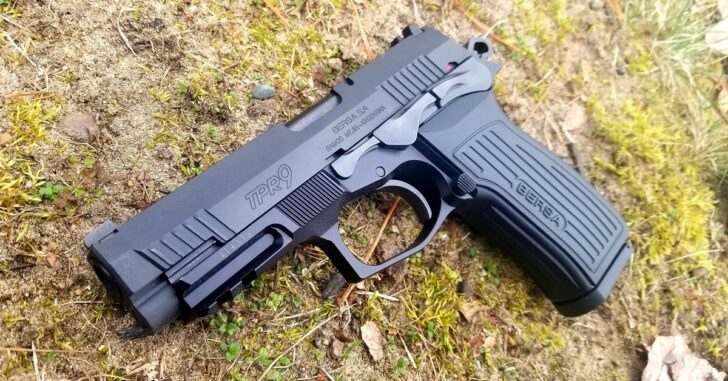 For years, Bersa has been producing affordable pistols that suit the working man’s budget. The popular Bersa Thunder in .380 ACP and the polymer frame Bersa BP9CC come to mind when considering well made pistols for concealed carry. In most cases, these pistols can be purchased for under $300. I own both of those models and find them to be quality made, budget friendly and impressive at the range.

Two years ago, Bersa stepped up their game with their new TPR series of pistols. TPR stands for “Thunder Pro Redesign.” They took the Bersa Thunder Pro models and created an upscale version which added several more features. Bersa produces two models in the TPR series. The one featured in this review is the full size TPR 9mm model with a 4.25” barrel and 17 round magazines. They also have a smaller model called the TPR9C which is suited for concealed carry. The Bersa TPR9C has a 3.25” barrel with 13 round magazines. The smaller Bersa TPR “C” models are also available in .40 SW and .45 ACP.

The Bersa TPR9 offers two 17 round magazines, ambidextrous controls, a thumb safety/decocker, a dust cover picatinny rail, forward slide serrations and metal 3-dot sights that are Sig Sauer compatible. They also redesigned the grip texturing by making it thinner than the original Thunder Pro grips. It also has an aluminum alloy frame, a loaded chamber indicator bar on top of the slide and weighs just 31 ounces unloaded.

The Bersa TPR9 is aesthetically pleasing with comfortable ergonomics. Having said that, what is most impressive is the single action trigger pull. In single action, the trigger breaks around four pounds however the reset is among the shortest reset that I have ever experienced. I consider the Bersa SA trigger similar to a Sig Sauer SRT (short reset trigger) and possibly even shorter. Refer to the attached video for a demonstration on how short the single action trigger actually is. I think you will be impressed.

The Bersa TPR9 MSRP is $479 however I see the TPR9 selling for around $370 on average. When considering everything this pistol offers, I think it is an incredible deal. Compared to other “high end” pistols, in the same alloy frame and full size class, the Bersa TPR9 is a bargain. In my opinion, this pistol is feature loaded that lacks nothing. I have owned the Bersa TPR9 for over two years. I am yet to experience a failure of any kind while using a variety of ammunition types.

Once assuring the gun is unloaded with the magazine removed, the Bersa TPR9 is among the easiest handguns to disassemble with a basic one-step process. There is a lever directly above the trigger. By moving that lever downward to vertical position, the slide can be removed from the frame. There is no need to pull the trigger. One will notice an uncaptured recoil spring, an all steel guide rod and full-length frame rails. To reassemble, simply perform the same steps in reverse order.

This pistol is most impressive and truly stands out at the range. Within the two years of ownership, the Bersa TPR9 fires incredibly well. It is smooth and accurate. I have a lot of rounds through it and even compared it with other handguns, yet this pistol remains impressive. The short trigger reset is very noticeable when live firing. The Pistol balances well and points accurately. I honestly would not change a single thing on the Bersa TPR9. I truly feel this “budget priced” pistol is a hidden gem in the gun world.

Previous article: Gun Shop Etiquette: The Do's & Don'ts While Shopping For A New Gun Next article: Stuck At Home: Can You Honestly Say You Carry Under Quarantine?