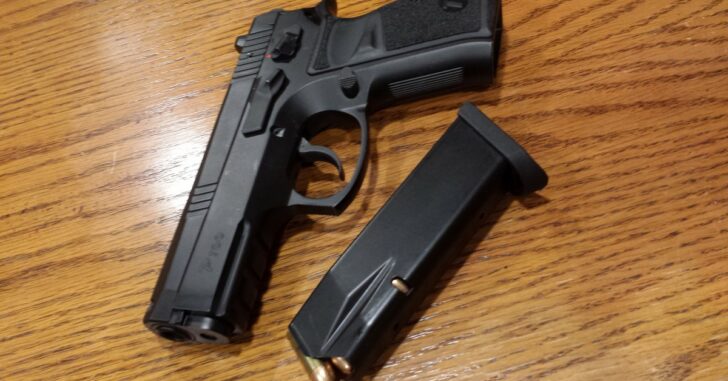 A question I often get is, “what pistol offers the most value for the money?” It’s a fair question being that there are so many choices within so many prices ranges. Most people I’ve spoken to are looking for the most quality they can find on an less expensive budget. Taken all of that, there is no question that CZ-USA puts out several of the finest firearms in today’s market. They are feature packed with incredible mechanics and accuracy. What if that same quality could be duplicated for far less money yet being manufactured by a trusted company like Canik? Enter the TriStar P100 into the scene that features many of the positive attributes that CZ fans love with a budget friendly price tag.

TriStar Arms is a primary importer of quality firearms in the hunting and shooting industry. The P100 is the newest pistol in the TriStar line and after owning it for over two months now I have to say, they have a winner. To top it off, it’s made Canik, a very popular firearm company who has gained the attention of many US shooters with their budget friendly handguns and exceptional quality. For years, people have told me that I need to add a Canik pistol to my collection and with the TriStar P100, I did. I now understand why so many give this pistol high praises.

I keep mentioning that it’s a budget pistol so what price are we talking about? The P100 MSRP is $490 but when I checked gunbroker it can be purchased for the mid to upper $300s with an average price right around $370. For a handgun priced so low one would think it lacks features, quality or mechanics. I think not, so let’s take a look at everything this TriStar P100 has to offer. TriStar offers two quality made 9mm magazines that hold 15 rounds each. Interestingly enough, the P100 will accept higher capacity CZ magazines as well. The baseplate has a small extension to allow for a full three finger grip on the gun. The two piece black polymer checkered grips have “sandpaper” like texturing with slight serrations on the front and rear backstrap for a firm hold on the gun. Some TriStar fans who watched the video suggested that I change them out for aftermarket grips but I am perfectly happy with the grips included. The P100 has a nice beavertail safety that mimics the CZ 75 as well as a thumb safety that’s positioned for easy access without the need to alter the grip angle. As mentioned, the frame is constructed of a heavy stainless steel that has been black cerakoted along with the slide to give a clean look which also allows for easy cleaning. It also sports a 1913 rail to attach one’s favorite accessory. Given it’s an all steel gun, the P100 has some significant weight behind it. On my scale, it weighs 37 ounces unloaded and 43.5 ounces fully loaded with 15 rounds of 9mm. So it weighs approximately the same as a full size 1911 however this compact pistol eats up any recoil that the 9mm round has to offer. The slide has fairly deep cut serrations in both the rear and front along with full length serrations on top of the slide to decrease sun glare which once again, copies a CZ 75. The P100 has a three dot sight system which is standard with many other pistols of it’s class. The P100 is a hammer fired double action – single action operated handgun. The trigger is smooth and crisp in both double and single action. As the video above demonstrates, the single action trigger pull is measured right at 5.5 pounds. When firing the P100, the smooth trigger action along with the weight of the pistol allows for extremely accurate and consistent shooting. The follow up shots and double taps were extremely quick. For those interested in carrying the P100, it has a “half cock” mode which allows the shooter to carry with the hammer partially cocked for a lighter double action first shot. The interior mechanics of the P100 are worth mentioning. The 3.7 inch barrel has a locking lug that fits snug with the top of the slide which keeps the barrel tight with little movement when shooting. It also has full length frame and slide rails which once again keeps the slide movement very snug and tight upon the action. These two features combined creates little to zero movement internally making the gun is extremely solid which results in incredibly accurate shooting. Also, the extractor is a claw located by the firing pin. The claw grasps the spent case and pulls it back to contact the ejector to deploy the case. Features like these are not common with budget friendly pistols however the P100 offers a lot of gun for the money. It is feature packed and quality made that compares to other handguns in the $500 plus category.

Disassembling the P100 is a simple process that requires no tools. Once the magazine is removed and the gun is verified unloaded, observe a marking on the rear of the frame and the slide. Pull the slide back about a quarter of an inch to align the markings and from the right side of the gun push the slide stop pin then remove it from the left side. Point the gun in a safe direction, pull the trigger to remove the slide. Then remove the uncaptured recoil spring and guide rod assembly with a tight grip to prevent it from taking off on you. Simply remove the 3.7 inch barrel and the P100 is field stripped. To reassemble, perform the same steps in reverse order without the need to pull the trigger. Overall, the TriStar P100 is an impressive pistol. It is built sturdy and feels very strong with the all metal frame. For me, there was no learning curve when shooting as the action was smooth and consistently accurate. It performed exactly like I expected it would without any malfunction to speak of. The way I see it, if you shoot a CZ 75 well then you will shoot the TriStar P100 just as well. On the video, I called the P100 a compact CZ 75 and I stand by that. Being a fan of CZ handguns, the P100 has the same excellent features and quality for a budget friendly price. If you are looking for an all stainless steel hammer fired pistol for under $400, look no further. The TriStar P100 along with several other TriStar models are excellent pistols for a very fair price.

Previous article: The Forgotten State: Hawaii Issues ZERO Concealed Carry Permits To Private Citizens in 2016 Next article: Under New Bill, FL Businesses Would Be Held Liable If They Ban Guns And SHTF