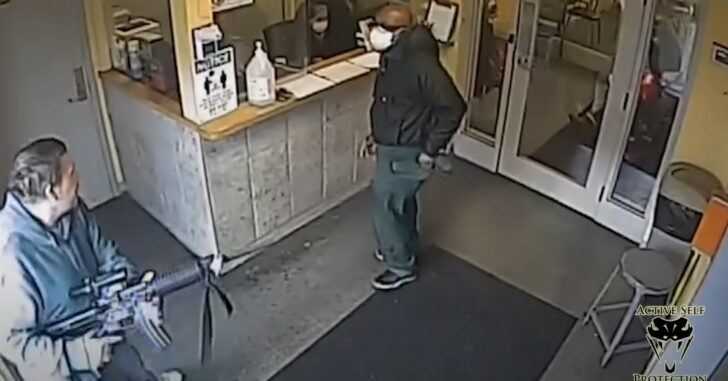 A man walked into a substance abuse treatment clinic with an AR-15, and just before had robbed a woman on the street and shot her. A security guard was in the lobby of the building at the time and wasted no time taking action in an attempt to control and disarm the man.

As soon as he walked into the lobby, he fired off a shot to let everyone know he means business.

The guard pinned the man against a wall and eventually worked his way outside, with another guard following and helping to subdue the man.

Police arrived, and the man was arrested and is facing a lengthy list of charges.

If you’re unarmed like this security guard was, and even if you were armed, knowing how to disable an attacker is important stuff, and the only way you’ll truly understand what that means is to get training that goes through these scenarios.

John from ASP gives some important tips in the video below, of which includes two surveillance videos from the incident to get a better understanding of how this all went down.

Previous article: 8 Of The Best Gun & Ammo Deals On Black Friday, Including $0.06 22LR - 2022 Next article: NY Concealed Carry Laws Are Not In Effect. Again. Apparently.