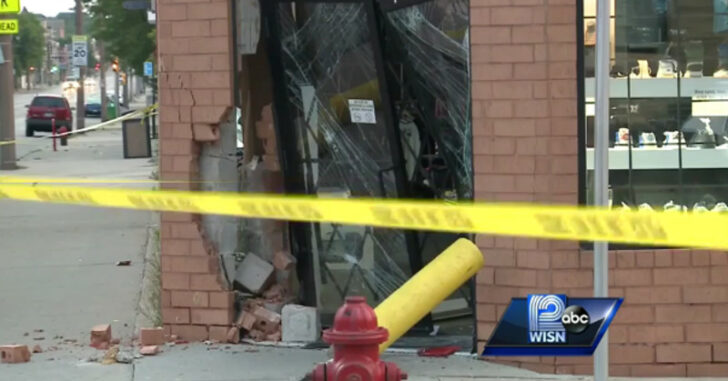 MILWAUKEE — Released surveillance video shows three career, hardened criminals using a minivan to smash open the door of a sporting goods store in Milwaukee, only to be greeted by a magazine of semi-automatic rifle fire.  The business owner can be seen initially taking cover as the minivan repeatedly tries to smash through layers of protective glass, concrete and steel.  The assailants reportedly made visual confirmation with the store owner and kept trying to enter regardless.

Watch the surveillance video and original news report at WISN-12.

The first man through the gate was struck multiple times and the rest left him for dead.  That assailant, Deishun Byrd-Mcway, 21, has been charged for the break-in.  After being taken to a nearby hospital, he refused to cooperate with police on identifying his accomplices after they dropped him off at a nearby hospital.

The business owner has decided to lawyer up in advance in case he needs to prove his right to self-defense before a county prosecutor.  It was blatantly obvious from the video, alone, that these guys were armed and didn’t give a care about laws, regulation, or lawyers.

The attorney for Bouchard’s owner told WISN 12 News reporter Christina Palladino his client had every right to defend himself after three men with guns broke into his store.

“The persons who tried to break into his store that night not only intended to steal but intended to kill him,” attorney John Schiro said.

He said the video clearly illustrates how the men rammed the back of a stolen minivan into concrete posts blocking the entrance. Then, the men jumped out and tried to squeeze through the opening of the gate.

It’s unfortunate that the need to have a semi-automatic firearm on standby is a necessity in Milwaukee.  It’s even more unfortunate that a man with clear evidence demonstrating a violent assault was taking place, has to prove his innocence.

No word on whether the county will be pressing charges against the business owner.

This isn’t the first time Bouchard’s has been knocked off, either.  Last time, another Bouchard’s Sporting Goods was hit by armed robbers and an employee was shot – so it’s not like the business owner didn’t have recent precedence to fear for his life when he sees three armed men bashing in through his front door.